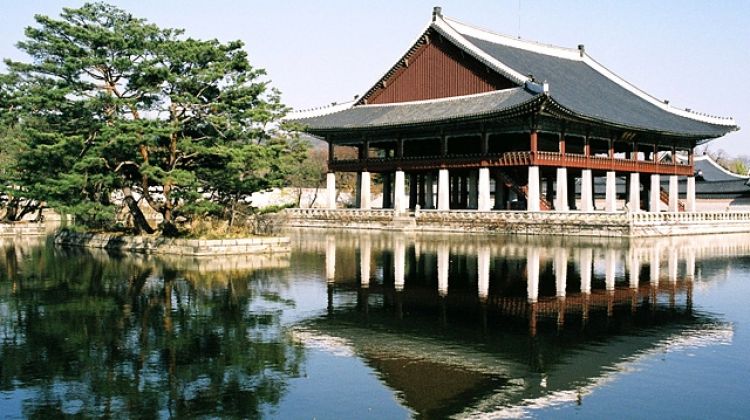 HIGHLIGHTS
You will be picked up from your hotel for the tour.

On your way to see the first attraction, you will pass by Deoksugung Palace. This tour starts at Cheonggyecheon stream, an 11km (7-mile) long, modern public recreation space in downtown Seoul. In July 2003, then Seoul mayor Lee Myung-bak initiated a project to remove the elevated highway and restore the stream. One of the goals of the project were to restore the history and culture of the region, which had been lost for 30 years, and to revitalize the economy of Seoul.

Next, visit the site of the royal garden of the Joseon Dynasty, Cheongwadae (The Blue House), the executive office and official residence of the South Korean head of state, the President of the Republic of Korea. The Blue House is in fact a complex of buildings, built largely in the traditional Korean architectural style with some modern elements. Stop by Cheongwadae Saranchae, a Korean presidential exhibition center, newly opened as of January 2010.

One of the highlights of this tour is a royal guard changing ceremony. It is a great opportunity to experience a rare traditional scene in Korea. Be sure to bring a camera to take pictures.

The National Folk Museum of Korea is a national museum of South Korea, located within the grounds of the Gyeongbokgung Palace that uses replicas of historical objects to illustrate the history of traditional life of the Korean people. There are three permanent exhibition halls, two special exhibition halls, a shop and a reference room.

Later visit Jogyesa, the chief temple of the Jogye Order of Korean Buddhism. It became this in 1936, thus playing a leading role in the current state of Seon Buddhism in South Korea. The temple was first established in 1395, at the dawn of the Joseon Dynasty; the modern temple was founded in 1910 and initially called Hwanggaksa. The name was changed to Taegosa during the period of Japanese rule, and then to the present name in 1954.

Lastly, you will be dropped-off at Myeongdong Lotte Hotel or Namdaemun market.
View More
CUSTOMER REVIEWS ABOUT I LOVE SEOUL TOUR
4.5 - Excellent
Based on 8 reviews
K
5 - Excellent
Kettelene's review for another I Love Seoul Tour tour
“This tour was quiet and intimate and allowed us to ask plenty of questions to our tour guide Jioang. She provided answers and provided other places to check out.”
C
4 - Very Good
Christina's review for another I Love Seoul Tour tour
“Th dmz is important part of a trip to Korea to understand. We went with our 12ys
Year old child and she found it interesting too. The tunnel I dont recommend for taller people as you have to hunch over much of the way. But its evocotice experience.
My only suggestion would be to update the short film.”
T
4 - Very Good
Tobias' review for another I Love Seoul Tour tour
“Very Good”
Read more I Love Seoul Tour reviews
WHAT'S INCLUDED WHAT'S EXCLUDED
Why Book with Bookmundi
What are customers saying about Bookmundi
Excellent
4.71 Average 334 Reviews

Other Practical InformationConfirmation will be received within 48 hours of booking, subject to availability Minimum numbers apply. The National Folk Museum is replaced with Deoksugung Palace on Tuesdays Namsangol Hanok Village is replaced with Seoul Museum of History on Tuesdays Cheongwadae Saranche is closed on Monday. Visit from outside only. Please advise of hotel name when booking this tour, so pickup can be planned for. This tour requires 2 people minimum to book Hotel pickup is only available for centrally-located Seoul hotels. If your hotel/guesthouse is behind alleys, our English guide will meet you in front of the nearest central hotel or nearest subway station.
NEED HELP OR HAVE A QUESTION ABOUT THIS TOUR?
If you have any question about this tour or need help with planning a trip, please do not hesitate to get in touch with us. We're ready to help.
Get help
hours 04 From US$ 35
Sorry, this product is currently not available.
Response Time: 1 hour Response Rate: 100% MAKE AN ENQUIRY