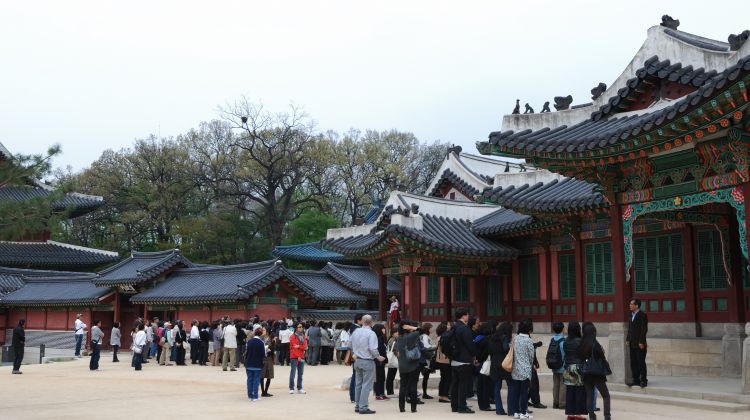 HIGHLIGHTS
There are lots of world cultural heritage places in Korea. During this morning tour, we'll lead you on a historical journey through Seoul.

The tour starts from hotel pick-up. Head off to the Buckchon Cultural Center, which will provide you with information about the Bukchon Hanok Village. The center shows exhibits and films relating to the history of Bukchon. It is a perfect starting point, which will let you experience Bukchon and its authentically Korean atmosphere.

Next to Buckchon, visit traditional houses called "hanok" dating back to the Joseon Dynasty. The name Bukchon, which literally translates to "northern village", refers to the area being located north of Cheonggyecheon, a Korean landmark.

You will then head to the Jongmyo Royal Shrine, built by Lee Seong Gye circa 1335-1408, the first king and founding father of the Joseon Dynasty. It was a primary place of worship for kings throughout the Joseon Dynasty and is a UNESCO-protected heritage. (This site is replaced Insadong on Tuesdays)

Afterward, you will visit the Changdeokgung Palace, which name means "to brighten virtue", and represents Korea's best-preserved palace, now UNESCO-protected (replaced with Gyeongbokgung Palace on Mondays).

The Story of King Sejong Exhibition Hall comprises of 9 different sections with a total area of 3,200 square meters. Throughout the museum are a variety of displays detailing Sejong’s invention of Hangeul, and his scientific, artistic, military, and political contributions.

The morning tour ends at Myeongdong where you can shop or have lunch.

View More
CUSTOMER REVIEWS
4.5 - Excellent
Based on 2 reviews
Asian explorer #×
5 - Excellent
“This tour was quiet and intimate and allowed us to ask plenty of questions to our tour guide Jioang. She provided answers and provided other places to check out.”
Very Good
4 - Very Good
“Very Good”
WHAT'S INCLUDED WHAT'S EXCLUDED
Why Book with Bookmundi
What are customers saying about Bookmundi
Excellent
4.72 Average 295 Reviews

Other Practical InformationConfirmation will be received within 48 hours of booking, subject to availability A minimum of 2 people per booking is required Times are subject to change due to local traffic conditions. There is a possibility of cancellation after confirmation if there are not enough passengers to meet requirements. In the event of this occurring, you will be offered an alternative or full refund Hotel pickup is only available for centrally-located Seoul hotels. If your hotel/guesthouse is at an alternate location, our English guide will meet you in front of the nearest central hotel or nearest subway station
NEED HELP OR HAVE A QUESTION ABOUT THIS TOUR?
If you have any question about this tour or need help with planning a trip, please do not hesitate to get in touch with us. We're ready to help.
Ask a question
hours 04 From US$ 55
CHECK AVAILABILITY
Response Time: 2 hours Response Rate: 100% MAKE AN ENQUIRY
Excellent 4.5 Based on 2 Reviews

Tour is operated by : I Love Seoul Tour
8 Reviews
Currently 03:38 in Seoul MAKE AN ENQUIRY Response Time: 2 hours Response Rate: 100%
AS SEEN IN: