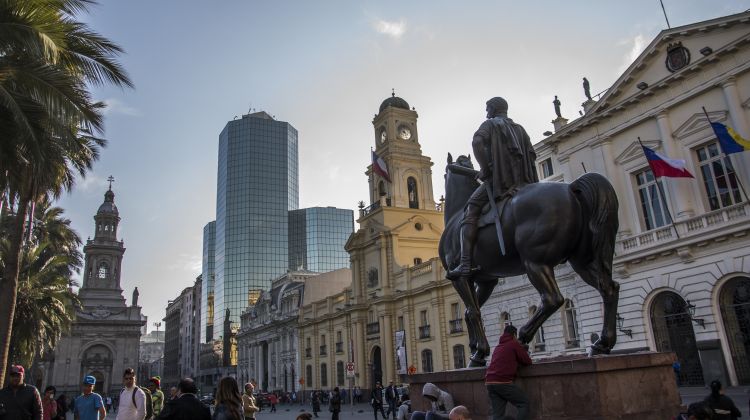 Tour with Flexible Booking Policy
HIGHLIGHTS
Chile’s capital, Santiago, is its largest city and home to half its population. A melting pot of diverse people, cultures and traditions, it/ has slowly transformed into a modern cosmopolitan. On this guided walking tour, immerse yourself in the Chilean culture as you make your way across the most emblematic points of the city, accompanied by an expert guide.

You’ll be picked up from your accommodation in the districts of Vitacura, Las Condes, Providencia and downtown Santiago. The travel by the subway to the downtown area where you’ll visit the Government Palace La Moneda: known worldwide for the coup in 1973; the Plaza de Armas: the meeting place for Chileans and foreigners; the Metropolitan Cathedral; the Santa Lucía Hill: the foundation of the city; and the Central Market: a seafood market, among others.

Enjoy a well-deserved lunch (inclded in the price of the tour) with the marine flavors of the Pacific Ocean at the Central Market. You can also try some typical Chilean drinks, such as the famous Mote con Huesillos. After lunch, you will go back to the subway to visit the picturesque bohemian neighborhood of Bellavista, located at the foot of San Cristobal Hill.

To end the tour, you have the option to visit La Chascona, house museum of the Nobel Prize winning poet Pablo Neruda (not included in the price) or return to your hotel.
View More
WHAT'S INCLUDED WHAT'S EXCLUDED
Why Book with Bookmundi
What are customers saying about Bookmundi
Excellent
4.71 Average 334 Reviews

Other Practical InformationHotel pick up is available to Vitacura, Las Condes, Providencia and downtown Santiago hotel districts. Legal age to drink alcoholic beverages is 18 years old
NEED HELP OR HAVE A QUESTION ABOUT THIS TOUR?
If you have any question about this tour or need help with planning a trip, please do not hesitate to get in touch with us. We're ready to help.
Get help
hours 06 From US$ 123
CHECK AVAILABILITY
Response Time: 1 hour Response Rate: 100% MAKE AN ENQUIRY