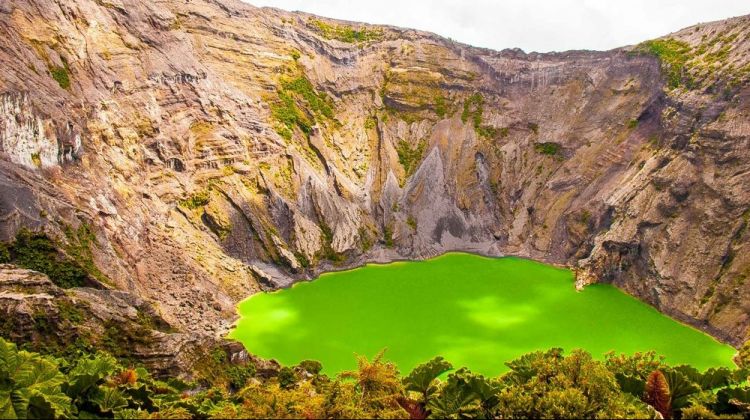 HIGHLIGHTS
Irazú Volcano National Park is a National Park in the Central Volcanic Conservation Area of Costa Rica. The volcano is still active although the last major eruptions were between 1963 and 1965, with occasional minor eruptions and some small lava flows since that time. This popular tour starts with a pick up at your hotel. A one-hour transfer will then take you to the summit of this beautiful volcano. In Costa Rica, it is known by the name of "El Coloso" (The Colossus) due to the catastrophes that it has provoked in the past.

At 11,260 feet (3,432 m), the Irazú Volcano is the highest active volcano in Costa Rica. It is easily visited from San José, with a road leading right up to the summit craters. From the top, it is possible to see both the Atlantic and Pacific Oceans on a clear day. However, such clear days are rare, and the volcano's summit is usually cloud-covered.

You will also get a chance to see the Crater Principal lake in the park, which has an unusual greenish yellow coloring caused by rainfall dissolving the minerals along the crater's walls. It has also been known to change colour to rust-red depending on the minerals present.


After the visit to the volcano, you will enjoy the beauty of the Orosi Valley and Town, Ujarras Ruins and Cachi Lake and its hydroelectric dam.

Lunch is included in a beautiful local restaurant before descending to the historical City of Cartago. Here you will visit the mysterious ruins of the old Parish and view the beautiful Basilica of our "Virgen de los Angeles" with rich displays of carvings, statues and art.

NEED HELP OR HAVE A QUESTION ABOUT THIS TOUR?
If you have any question about this tour or need help with planning a trip, please do not hesitate to get in touch with us. We're ready to help.
Get help
hours 09 From US$ 175 See Group Discount
CHECK AVAILABILITY
Response Time: 2 hours Response Rate: 100% MAKE AN ENQUIRY