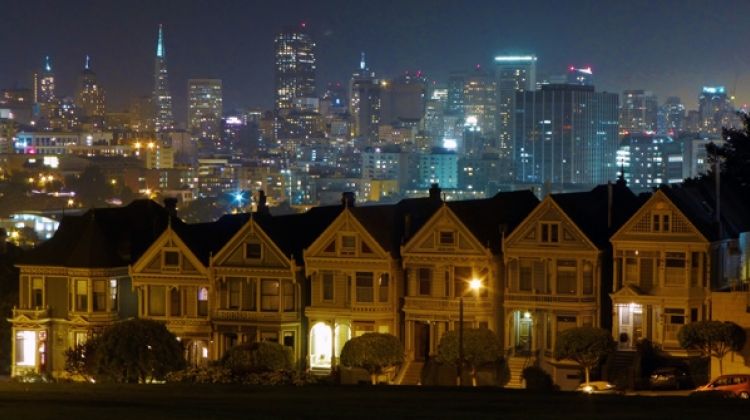 HIGHLIGHTS
This live narrated 2 hour tour of San Francisco shows you the most vibrant neighbourhoods of the city!

With spectacular views from the top of an original open top Double Decker bus, the tour covers all major sites of San Francisco.
Departing from Fisherman’s Wharf, it takes you through Russian Hill and Nob Hill with its impressive Grace Cathedral and some of the best views of San Francisco. Passing the Financial District, Union Square, Chinatown, the tour then crosses the Bay Bridge with its spectacular art installation of lights that have become San Francisco’s iconic light sculpture, and further on to Treasure Island - a little island between San Francisco and Oakland with the best views of San Francisco skyline. On your way back you will see you will drive up Embarcadero, as well as famous Fisherman’s Wharf and Pier 39. Exact highlights may vary according to the season, weather conditions, and San Francisco's famous traffic, but generally the tour includes:

Please Note: Depending on the time of the year, it may not be dark on this tour.
View More
WHAT'S INCLUDED WHAT'S EXCLUDED
Why Book with Bookmundi
What are customers saying about Bookmundi
Excellent
4.71 Average 318 Reviews

Other Practical InformationDeparture times are 6:30PM and 7:00PM (depending on season, possibly special events and traffic). We advise to line up for the tour at least 15 minutes prior to departure, especially during summer months (May – September) as the buses tend to fill up quickly during peak season.
NEED HELP OR HAVE A QUESTION ABOUT THIS TOUR?
If you have any question about this tour or need help with planning a trip, please do not hesitate to get in touch with us. We're ready to help.
Get help
hours 02 From US$ 35
CHECK AVAILABILITY
Response Time: 1 hour Response Rate: 100% MAKE AN ENQUIRY