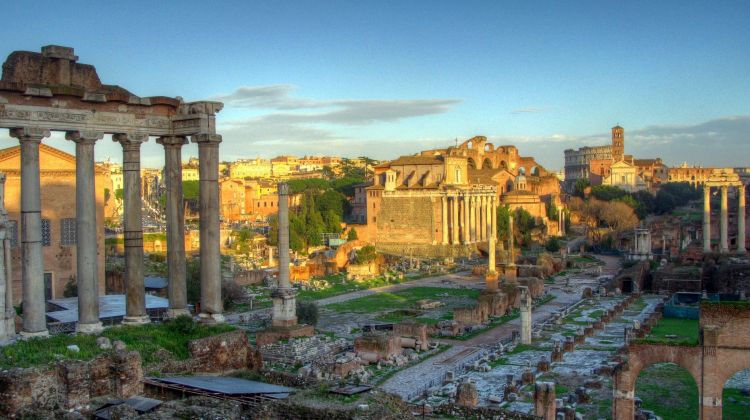 HIGHLIGHTS
Leave the crowd behind and with your skip-the-line tickets visit the Colosseum and the Imperial Roman Forum. Explore the most monumental elements of the Eternal City with a private tour guide who will bring to life the spirit of the ancient Roman world.

Visit the Colosseum, one of the largest structures of the ancient world, where Romans once gathered to watch the gladiator games, battles with wild beasts, and according to legend, sea battles. Discover how the Colosseum, a massive stone amphitheater which seated an estimated 60,000 spectators, was built in only 8 years. Your guide will unlock fascinating stories of its design and construction, the political benefit, the fighters, and the eventual end of the games at the Colosseum.

At the Imperial Roman Forum, your guide will bring to life the mythology, the popular celebrations of the time, and the gods of ancient Rome, which are reflected in the star signs in contemporary astrology. Learn how the pagan holiday Saturnalia influenced the unfolding of Christmas on the 25th of December today. Listen to the story of the Lapis Niger (Latin for ‘black stone’), the most ancient Latin text ever discovered in the world - which is housed in the foundation of a column in the Forum.

Discover the Temple of the Vestal Virgins - six young women taken from aristocratic families to serve as virgin priests of Vesta. They worked in the temple for a period of 30 years under different emperors and were regarded almost as goddesses in status. Their foremost duty was maintaining the sacred fire of Vesta which represented the hearth of Rome. As legend had it - as long as the sacred flame burned, Rome would endure.

From the Forum you will take a pleasant stroll to Palatine Hill, where Rome is thought to have originated. Walk among its beautiful hills and gardens and explore the Domus Augustus - Villa of Augustus - the partially excavated palace of Augustus and successive emperors. Your guide will discuss the legendary cave of Palatine Hill where, as myth has it, Romulus and Remus were found by the she-wolf who nurtured them through infancy.
View More
WHAT'S INCLUDED WHAT'S EXCLUDED
Why Book with Bookmundi
What are customers saying about Bookmundi
Excellent
4.71 Average 334 Reviews

Other Practical InformationChildren under 4 tour for free A moderate amount of walking is involved Due to uneven surfaces, this tour is not recommended for those with walking disabilities or using a wheelchair
NEED HELP OR HAVE A QUESTION ABOUT THIS TOUR?
If you have any question about this tour or need help with planning a trip, please do not hesitate to get in touch with us. We're ready to help.
Get help
hours 03 From US$ 119 See Group Discount
CHECK AVAILABILITY
Response Time: 2 hours Response Rate: 100% MAKE AN ENQUIRY