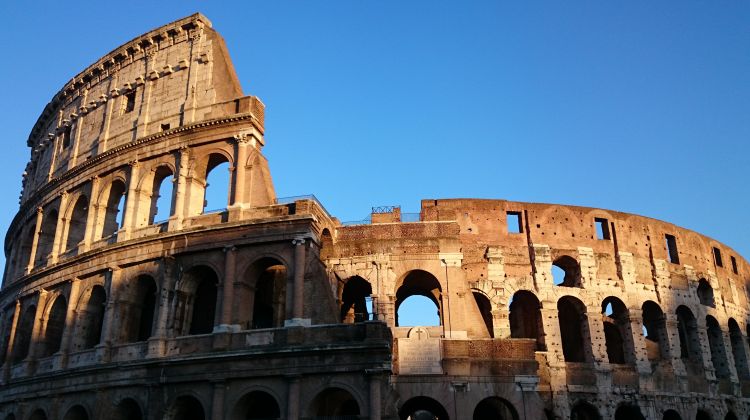 HIGHLIGHTS
Forget about the Super Bowl, the World Series, and the World Cup. The Colosseum has hosted the most spectacular games ever. It’s estimated that more than 500,000 people, and a million animals, lost their lives battling in the amphitheatres arena. We’ll also literally step back in time in our walk through the Roman Forum, retracing the steps of Caesar, Augustus and Nero.

As we walk down Ancient Rome’s chief street, the Via Sacra, we’ll focus on the altar where Julius Caesar was cremated; the House of the Vestal Virgins, a temple where priestesses vigilantly guarded the eternal flame of the Empire; the Senate, where key decisions that guided the course of western history were made; the Arch of Septimius Severus; as well as many other extraordinary monuments and ruins.

We’ll visit the Palatine Hill, site of the city’s very earliest settlements, which became the preferred residential area for most powerful and richest Roman families. We’ll stop to marvel at the Arch of Constantine, celebrating Constantine’s victory over the pagan world, and marking the moment when Christianity became the official religion of the Empire.

Other Practical Information • Confirmation will be received within 48 hours of booking, subject to availability • Not wheelchair accessible • Wear Comfortable Shoes • Bring water bottles to fill up during the tour • Hat and sun screen necessary during the summer • Unforseen strikes from the guardians of the site can affect the itinerary • Backpacks and large bags are not allowed inside the Colosseum!! -- NB* There is no cloakroom service at the Colosseum. • Visitors must pass through metal detectors at the security check point. Please expect to wait 15-20 minutes to clear security.
NEED HELP OR HAVE A QUESTION ABOUT THIS TOUR?
If you have any question about this tour or need help with planning a trip, please do not hesitate to get in touch with us. We're ready to help.
Get help
hours 03 From US$ 489 See Group Discount
CHECK AVAILABILITY
Response Time: 2 hours Response Rate: 100% MAKE AN ENQUIRY