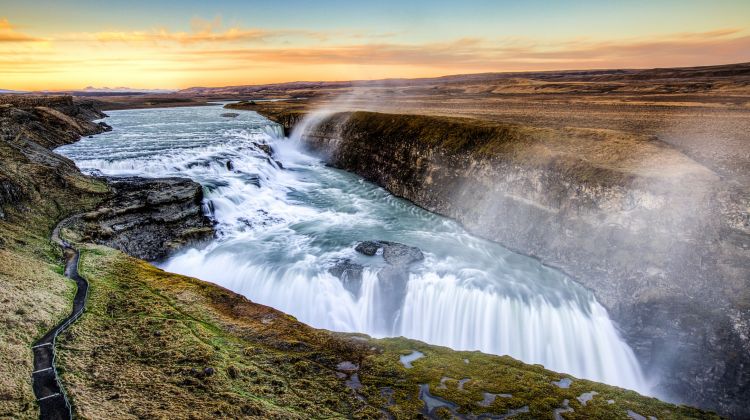 HIGHLIGHTS
The Grand Golden Circle and Crater is a compact tour that takes you to a series of remarkable and diverse sites in the Southwest of Iceland in a span of only eight hours. If you are only doing one tour in Iceland, this is the one!

In the Geysir geothermal area, we get the chance to observe the boiling hot spring Strokkur spout steaming water up to 30 meters into the air every 8 minutes.

The iconic waterfall of Gullfoss, or Golden Falls, is only a 7 minutes’ drive from Geysir – located in the glacial river Hvítá. It's elegant and majestic form is like no other, where the torrential river water plummets in two steps down into a 32 meters deep canyon.

Þingvellir National Park is not only a site of geological wonder, located at the intersection of the North American and Eurasian tectonic plates but also a place charged with history, as the site of the national parliament since 930. Þingvellir tells stories of geographical and political struggles, compromises and ongoing evolution. Þingvellir was accepted on the UNESCO World Heritage List for its cultural values in 2004.

Additionally, the tour includes a visit to the volcanic crater lake Kerið.
View More
CUSTOMER REVIEWS
5 - Excellent
Based on 1 review
Amazing tour !!!
5 - Excellent
“My husband and I had an amazing day. I can highly recommend this tour to everyone who comes to visit Iceland. Travelling by mini bus is much more convenient. We were picked up in time from the hotel we agreed on as we stayed at a different place. One of the highlights of the tour was our amazing guide Fannar. He was very informative, knowledgeable , fun and a very good driver. He brought us home safely. If you book this tour you will definitely get value for your money.”
WHAT'S INCLUDED WHAT'S EXCLUDED
Why Book with Bookmundi
What are customers saying about Bookmundi
Excellent
4.71 Average 332 Reviews

NEED HELP OR HAVE A QUESTION ABOUT THIS TOUR?
If you have any question about this tour or need help with planning a trip, please do not hesitate to get in touch with us. We're ready to help.
Get help
hours 08 From US$ 72
CHECK AVAILABILITY
Response Time: 2 hours Response Rate: 100% MAKE AN ENQUIRY