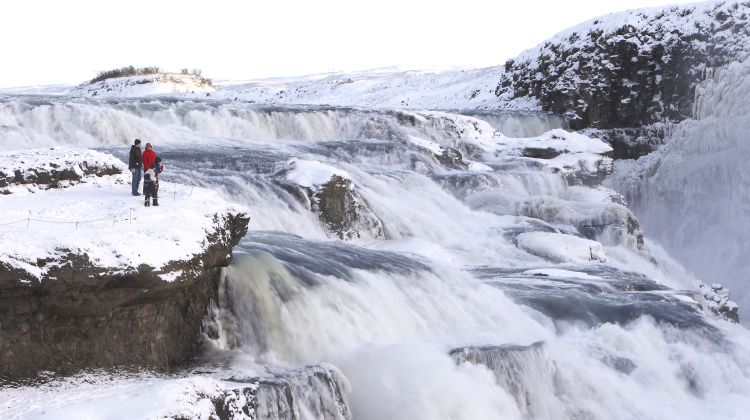 HIGHLIGHTS
Join us on this 8-hour trip to visit some of Iceland‘s most stunning sights. Travel to the Geysir geothermal area, known for its hot springs; see Gullfoss, one of the most iconic waterfalls of Iceland; and explore the UNESCO-listed Þingvellir National Park. Also, get the chance to learn more about growing vegetables in a country which doesn’t receive much daylight for most of the year.

Start by driving to the Geysir geothermal area in South Iceland, to whom all the geysers in the world owe their name. See the active Strokkur geyser, which shoots up a column of water nearly 30 metres (98ft) high into the air every few minutes.

Travel to Gullfoss next. Gullfoss is one of the most famous waterfalls in Iceland and rightly so. The three-tiered waterfall is part of the glacial river Hvítá and falls into a 62-metre-deep canyon. During the first half of the 20th century, there were ideas about using the waterfall to generate electricity.

The UNESCO-listed heritage site of Þingvellir National Park is your next stop on the itinerary. This national park is both geologically and historically significant. Apart from being the location of the oldest parliament in the world, Alþingi, this is also the place where you can see the Mid-Atlantic ridge above ground.

Your final destination of this tour is Friðheimar, one of Iceland’s biggest greenhouses, where you will get the chance to learn more about the secrets of growing delicious, pesticide-free tomatoes and cucumbers with the aid of the geothermal heat, which Iceland has in abundance, and 600 resident bumblebees of the greenhouse.

Drive back to Reykjavík after this 8-hour tour comes to an end.
View More
WHAT'S INCLUDED WHAT'S EXCLUDED
Why Book with Bookmundi
What are customers saying about Bookmundi
Excellent
4.72 Average 305 Reviews

Other Practical InformationTour guides: English: Daily (throughout the year) German: Monday, Tuesday, Thursday & Saturday (throughout the year) French: Sunday (throughout the year) Spanish: Wednesday and Saturday (3 June - 31 August) & Monday and Thursday (1 September - 2 June) Remember to dress warmly.
NEED HELP OR HAVE A QUESTION ABOUT THIS TOUR?
If you have any question about this tour or need help with planning a trip, please do not hesitate to get in touch with us. We're ready to help.
Ask a question
hours 08 From US$ 73
CHECK AVAILABILITY
Response Time: 3 hours Response Rate: 100% MAKE AN ENQUIRY