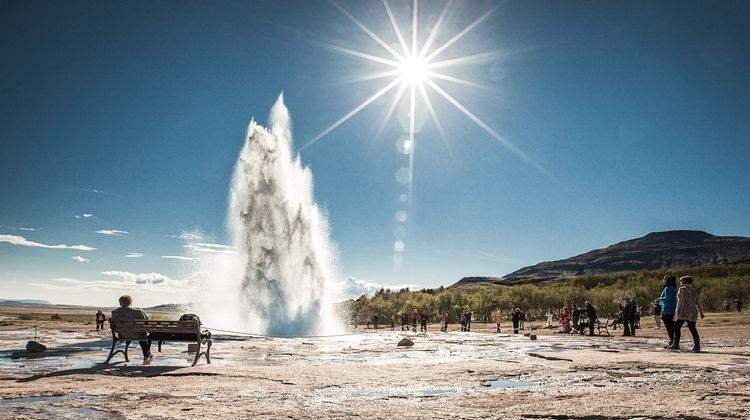 HIGHLIGHTS
Not everyone is an early riser! This tour takes you to the most renowned natural pearls of the Southwest of Iceland in a single afternoon.

In the Geysir geothermal area, we get the chance to observe the boiling hot spring Strokkur spout steaming water up to 30 meters into the air every 8 minutes.

Then, we head to the iconic waterfall of Gullfoss, or Golden Falls, which is only a 7 minutes’ drive from Geysir – located in the glacial river Hvítá. Its elegant and majestic form is like no other, where the torrential river water plummets in two steps down into a 32 meters deep canyon.

Þingvellir (Thingvellir) National Park is not only a site of geological wonder, located on the intersection of the North American and Eurasian tectonic plates but also a place charged with history, as the site of the national parliament since 930. Þingvellir tells stories of geographical and political struggles, compromises and ongoing evolution. Þingvellir was accepted on the UNESCO World Heritage list for its cultural values in 2004.

Note: The tour will no longer stop at Kerið Volcanic Crater from 1 September 2018 onwards.
View More
CUSTOMER REVIEWS
5 - Excellent
Based on 6 reviews
Delightful Golden Circle Tour
5 - Excellent
“We were completely delighted with our guide Torfi on the Golden Circle minibus tour. He was thoughtful, courteous, clearly communicating about each stop before so we would know what to expect. He was so knowledgeable about so many details of Iceland. From his personal experience being born and raised here to his complex detailed geologic knowledge made understandable, we were eager listeners. He patiently answered all our questions, time and again.

Our party of three would recommend him with the highest praise. We were comparing notes with friends on a different bus and by far we had the best experience.

And he was an excellent driver!

Thank you Torfi!”
Guide was amazing
5 - Excellent
“Hi , we just wanted to say a really BIG thank you to our guide thora. We went on the afternoon golden circle tour with her and sigie (the driver) They were both fantastic,driving superb and thora taught us a lot about loads of Iceland with her information about everything on iceland and little stories about trolls and hidden people. Easily the best tour we have been on . They were entertaining from start to finish . We definitely be recommending you company to friends and family”
Great tour, fab guide, clean coach with big windows for great views
5 - Excellent
“Tour ran like clockwork. Picked up from bus stop 2 & taken in minibus to our coach for the day which was clean, with big windows to take in the spectacular views enroute. Day paced well to see everything, but not too rushed. (We had only 3 days to see Iceland) Tour guide (Elun) regaled us with some great Icelandic stories & myths! Had lunch at geyser, lots of choice and served quickly despite being busy. Expensive of course. Great value tour for all the family (age 8,15,45 & 50!)
Highly recommended!”
Awesome Golden Circle Tour
5 - Excellent
“Just to say we were very impressed with our afternoon Golden Circle Tour. "Rock" our guide was fantastic, informative and had a great sense of humour. Our driver Tomik was great too and we thoroughly enjoyed our day. The transfer was on time and we were very happy with everything.