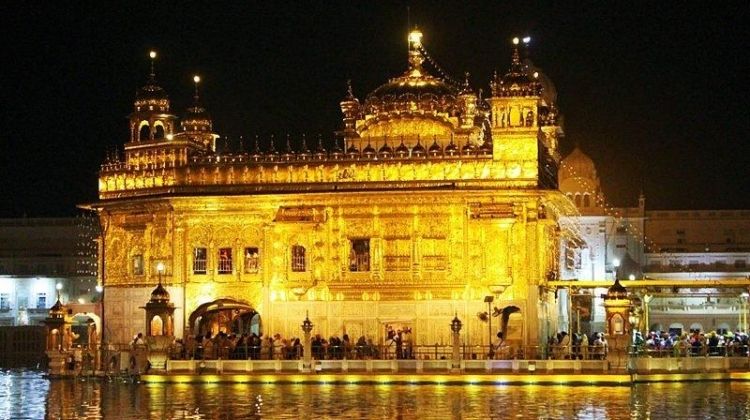 Tour with Flexible Booking Policy
HIGHLIGHTS Download trip notes
Starting in Punjab and ending in New Delhi, the "Foothills & Faiths" trip is a guided cultural, religious and historic sites trip that takes 12 days. You will travel through Rishikesh, Punjab, Shimla and 3 other destinations in India. "Foothills & Faiths" is a small group trip which includes accommodation, transport, meals and others.

This 12-day India tour takes you to the edge of the towering Himalayas from Dharamsala to Rishikesh, as we explore some of the most important Hindu, Buddhist and Sikh sites along the way.

We’ll explore some of India’s more remote villages, as we board the Himalayan Queen toy train to Shimla. We’ll start in Amritsar, visiting its Golden Temple and a community kitchen before heading to the foothills of the Himalayas to the Buddhist enclave known as Mcleod Ganj - the home of the Dalai Lama as well as the Tibetan government in exile. While we’re here, we’ll take in the beauty of its monasteries and temples situated atop of its hilltops.

We’ll also take you to the heritage villages of Pragpur and Garli, famous for its colonial-style architecture, before boarding the Himalayan Queen ‘toy train’ as we make our way up through the scenic mountains and countryside, passing through numerous tunnels and villages as we make our way to Shimla.

We’ll then hop on a much faster train to the Hindu pilgrimage site in the ancient city of Haridwar, where we’ll witness pilgrims bathing in the spiritual waters of the River Ganges, before boarding a cableway to the top of a temple which overlooks the flowing river. We’ll take a short drive to Rishikesh, to witness an Aarti ceremony at the Ganges at the Triveni Ghat.

We’ll spend two days in Rishikesh, exploring the banks of the River Ganges via foot and the many places of worship here. Rishikesh’s city centre is also one of India’s most well-known yoga and meditation locations. We also have plenty of free time during which various options are available, including white water rafting, a cooking class, and a wildlife safari in Rajiji National Park.

No additional cancellation fees apply for this Foothills & Faiths tour. You can cancel the tour up to 56 days prior departure and avoid paying the full amount, but your deposit paid is non-refundable. No refund applies for cancellations within 55 days of departure.

For this Foothills & Faiths tour getting the required visa(s) is the responsibility for each individual traveller, as visa requirements vary depending on your nationality. We recommend to check with your local embassies representing the countries that you are travelling to, as part of this itinerary.

NEED HELP OR HAVE A QUESTION ABOUT THIS TOUR?
If you have any question about this tour or need help with planning a trip, please do not hesitate to get in touch with us. We're ready to help.
Get help
days 12 From US$ 2,445
Unlock US$ 122 in extra savings CHECK AVAILABILITY
Response Time: 1 hour Response Rate: 100% MAKE AN ENQUIRY

Tour is operated by : Encounters Travel
6 Reviews
Currently 03:35 in Leeds MAKE AN ENQUIRY Response Time: 1 hour Response Rate: 100%
Download Trip Notes Enter your email to get a PDF file containing all the trip information for the Foothills & Faiths tour.
Trip Notes Sent
We have sent the trip notes for this tour to:

If you book the Foothills & Faiths tour within the next 5 days, you can get by applying the following code: