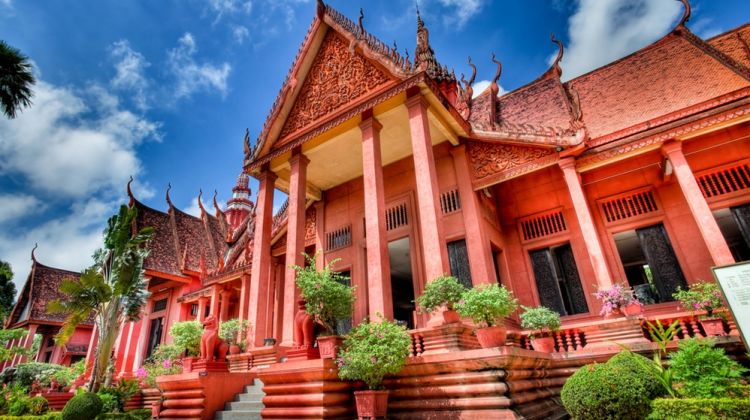 HIGHLIGHTS
Discover the great palaces and pagodas of Phnom Penh on this 6-hour afternoon tour. Visit the Royal Palace of Cambodia, Silver Pagoda, and the infamous Tuol Sleng Museum while you admire Khmer era architecture and learn about the notorious Killing Fields.

Explore the troubled, but fascinating history of Cambodia on this sightseeing tour of Phnom Penh, and visit some of the city’s most beautiful pagodas and palaces, as well as the infamous genocide museum of Tuol Sleng.

Following a hotel pick-up, your guide will take you to the Royal Palace, built in 1866 by the French after King Norodom relocated the royal capital from Oudong. Located on the western banks of the Tonle Sap River and Mekong River, the palace complex features stunning Khmer architecture, divided into 4 main compounds.

The grounds of the palace are also home to the Silver Pagoda, which received its name because its floor is made of 5,329 silver tiles. Learn about the Khmer kings who resided here the whole time except during the period when the Khmer Rouge took control in 1975. See gold and jeweled Buddha statues in the Silver Pagoda, and the Angkor Wat style Bell Tower.

Then, learn about the turbulent years of the Khmer Rouge at the infamous Tuol Sleng Museum. Located in a former high school that was used as the notorious Security Prison 21, the Genocide Museum traces the story of the Killing Fields and the torture and executions that took place from 1975-79. See exhibits that tell the stories of some of the estimated 20,000 prisoners that were killed.

Return to the city center for a drop off at your hotel. Or you can opt to drop off at a riverside café or a bar if you want to enjoy the sunset.
View More
CUSTOMER REVIEWS ABOUT GREEN ERA TRAVEL
4 - Very Good
Based on 32 reviews
David's review for another Green Era Travel tour
5 - Excellent
“We were picked up at our hotel, and drove to the lake. Had a nice long motor boat ride on the lake, we also went on a small row boat ride for about 30 minutes, for $10/2 people, and were floating through the houses and trees. I think the small boat ride was very relaxing, you could see crocodiles in the water. There are also a sales people floating on the lake, so be prepared to purchase something too.”
Greg's review for another Green Era Travel tour
5 - Excellent
“Excellent”
Natalie's review for another Green Era Travel tour
5 - Excellent
“This was a beautiful morning away from Siem Reap. Borain our guide was lovely and very attentive. It was beautiful seeing the communities elsewhere in Cambodia. Would recommend!”
Read more Green Era Travel reviews
WHAT'S INCLUDED WHAT'S EXCLUDED
Why Book with Bookmundi
What are customers saying about Bookmundi
Excellent
4.71 Average 318 Reviews

NEED HELP OR HAVE A QUESTION ABOUT THIS TOUR?
If you have any question about this tour or need help with planning a trip, please do not hesitate to get in touch with us. We're ready to help.
Get help
hours 06 From US$ 84 See Group Discount
CHECK AVAILABILITY
Response Time: 3 hours Response Rate: 100% MAKE AN ENQUIRY