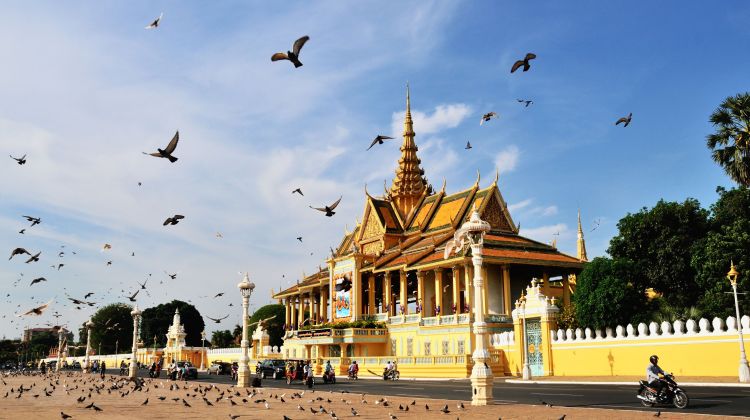 HIGHLIGHTS
On this small-group tour, visit the most highlighted sites of the city and learn about its history. Discover the great palaces and pagodas, visit the Royal Palace of Cambodia, see the 5,329 silver tiles of the Silver Pagoda, and visit the infamous Tuol Sleng Museum. Admire Khmer era architecture, and learn about the notorious Killing Fields. Get stunning views of the Tonle Sap and Mekong from the riverside before heading back to your hotel.

Today, you will join a group tour and your guide will pick up from a few different hotels, so the pickup time is variable between 7:30am to 8:30am. Your guide will take you to the Royal Palace, built in 1866 by the French after King Norodom relocated the royal capital from Oudong. Located on the western banks of the Tonle Sap and Mekong River, the palace complex features stunning Khmer architecture, divided into 4 main compounds.

The grounds of the palace are also home to the Silver Pagoda, which received its name because its floor is made of 5,329 silver tiles. Learn about the Khmer kings, resident at all times, with the exception of the period when the Khmer Rouge took control in 1975. See gold and jeweled Buddha statues in the Silver Pagoda, and the Angkor Wat style Bell Tower.

Then, learn about the turbulent years of the Khmer Rouge at the infamous Tuol Sleng Museum. Located in a former high school that was used as the notorious Security Prison 21, the Genocide Museum traces the story of the Killing Fields and the torture and executions that took place from 1975-79. See exhibits that tell the stories of some of the estimated 20,000 prisoners that were killed.

Return to the city center and get stunning views of the Tonle Sap and Mekong River Side before tour ends.

This tour concludes with return transfer to your hotel or any requested drop off point within the city center.

NEED HELP OR HAVE A QUESTION ABOUT THIS TOUR?
If you have any question about this tour or need help with planning a trip, please do not hesitate to get in touch with us. We're ready to help.
Get help
hours 07 From US$ 39 See Group Discount
CHECK AVAILABILITY
Response Time: 1 hour Response Rate: 100% MAKE AN ENQUIRY