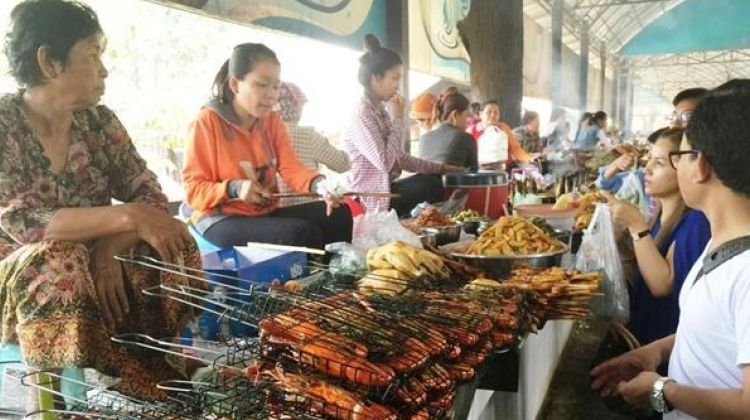 HIGHLIGHTS
Phnom Penh city, once known as the "Pearl of Asia", is actually noted for its beautiful and historical architecture and attractions. There, go on a cruise and have lunch on the Mekong River. Also pass by the local market, the Colonial District, the Royal Palace and the Silver Pagoda which houses many national treasures including gold and jeweled Buddha statues.

Next, by crossing Kampung Cham and kampong Thom, you will discover the Pre-Angkorian temple Wat Nokor built in the middle of the 11th century, a rubber plantation and finally, Sambor Prey Kuk, another Pre-Angkor era temple complex.

Angkor Wat is an incredible temple complex near Siem Reap with the largest religious monument in the world. This place includes a great diversity of buildings: Hindu style which gradually morphed on a Buddhist style, a variety of styles such as temple-mountains and galleried temples with different construction materials like sandstone, bricks and laterites. The ornament's innovation in each temple shows the wealth and ingenuity of Khmer art. This destination enables us to explore this architectural memory and to visualize the fabulous power of this former capital.

Taking a private boat, you will go to Battambang, a peaceful and pleasant town closed by Sangker river, a small body of water that flows through the province. This city is also considered as the best French colonial architecture site in the country. Its situation is the perfect base for visiting the Wat Phnom Banon and Ek Phnom temples and the nearby villages, the Angkorian period museum and possibly, the famous Bamboo Train.
View More
ITINERARY Expand All
WHAT'S INCLUDED WHAT'S EXCLUDED
Why Book with Bookmundi
What are customers saying about Bookmundi
Average Reviews

NEED HELP OR HAVE A QUESTION ABOUT THIS TOUR?
If you have any question about this tour or need help with planning a trip, please do not hesitate to get in touch with us. We're ready to help.
Get help
days 10 From US$ 1,223 See Group Discount
CHECK AVAILABILITY
Response Time: 2 hours Response Rate: 100% MAKE AN ENQUIRY