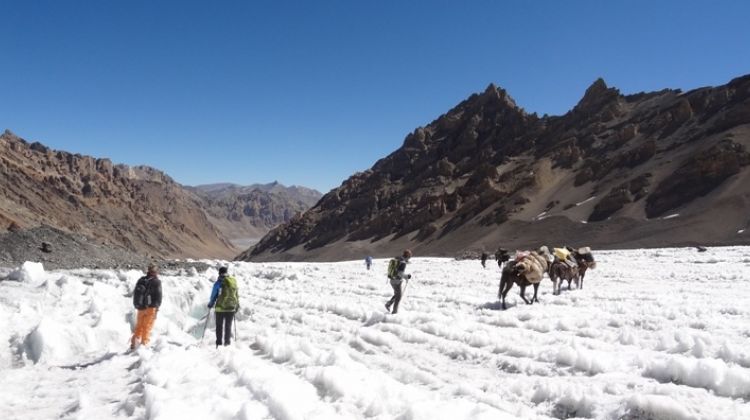 TOUR OVERVIEW
This classic Trans-Himalayan trek retraces the historical trade route between Spiti, Changthang and Tibet. The trek begins in Kibber, a high village popular for spotting of the highly enigmatic and elusive snow leopard. The meadows here serve as the breeding grounds for the noted horses of Spiti. Due to its proximity to Tibet; this region has only recently been opened to trekkers and still has many unclimbed peaks and hidden valleys. We drive to Kaza the district headquarters and spend an extra day to acclimatize.

The trail descends the Kibber gorge and then climbs over the Parang la (5600 m), the source of the Pare Chu River, the only one of its kind that emanates from India, flows into Tibet and re-enters India again in Spiti. Across the pass, we witness an incredible change of scenery as we walk towards the Rupshu plains of Changthang plateau (the eastern-most tip of the Tibetan Plateau), known for the a very high population of Kiangs (Tibetan Wild Ass).For the last two days, we camp by the breathtaking campsites, one of them being located on the southern edge of the Tso Moriri Lake at 15,000ft.msl which is 27 km long and nearly 8 km wide. The lake hosts nesting grounds for a variety of birds like Brahminy ducks, black-necked cranes and the bar-headed geese.

A fairly demanding trek across harsh terrain, this trip offers a variety of landscape from the narrow reddened gorges of Spiti to the massive open spaces of Changthang, to expansive lakes set in the high plateaus with views of mountains far into Tibet.

NEED HELP OR HAVE A QUESTION ABOUT THIS TOUR?
If you have any question about this tour or need help with planning a trip, please do not hesitate to get in touch with us. We're ready to help.
Get help
days 16 From US$ 1,259
CHECK AVAILABILITY
Response Time: 1 hour Response Rate: 100% MAKE AN ENQUIRY