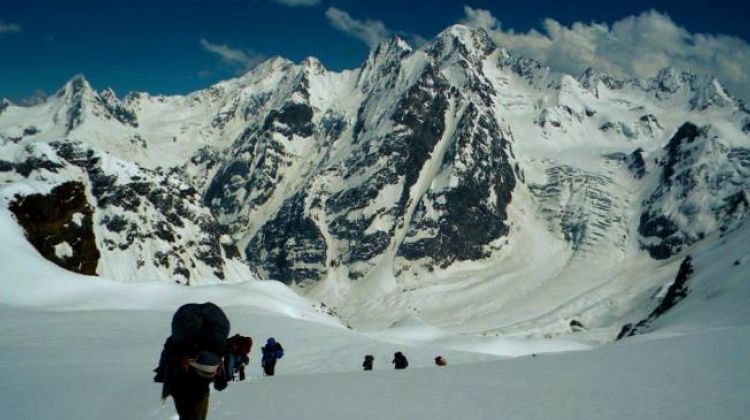 TOUR OVERVIEW
Between two of the most haloed pilgrimage sites in the Himalayas lies a land that nurtures a legend worthy of difficult discovery and extreme exploration. A tale that has drawn feted explorers of the like of Meade, Shipton and Tilman, Martin Moran, Harish Kapadia, and countless other intrepid souls. They were all drawn by the lore that a priest from Badrinath would trek to Kedarnath in a day.

The explorations, which began as early as 1934, have mostly come a cropper, with weather, terrain and nerves beating each party back.

The prize of the exploration is the crossing of the Panpatia col, a pass that hides its approach within drifts of moraines, crevasses and massive icefalls. But a route across it exists, and we know that from the many reports submitted by the mountaineers, and the final successful crossing by a duo from West Bengal, in 2007.

After extensive research and reading, and fresh from the successful crossing of this legendary route, we at White Magic are ready to open a once-hidden expanse of the Himalaya to the inquisitive of mind and sturdy of heart. Join us as we unravel the mythical Panpatia col bit by alluring bit.
View More
ITINERARY
Alt. in: ALTITUDE MAP
Expand All
WHAT'S INCLUDED WHAT'S EXCLUDED
Why Book with Bookmundi
What are customers saying about Bookmundi
Excellent
4.71 Average 318 Reviews

NEED HELP OR HAVE A QUESTION ABOUT THIS TOUR?
If you have any question about this tour or need help with planning a trip, please do not hesitate to get in touch with us. We're ready to help.
Get help
days 16 From US$ 1,550
CHECK AVAILABILITY
Response Time: 3 hours Response Rate: 100% MAKE AN ENQUIRY