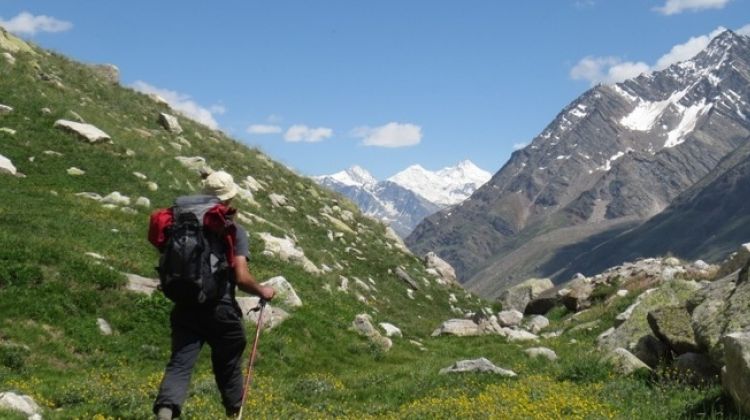 Previous Next
See Itinerary
TOUR OVERVIEW
The Kang La was the traditional route used by Lahaulis (people from Lahaul) to cross over into Zanskar and on to Ladakh. It is one of the high passes on the Great Himalayan range where you crossover from Himachal into Ladakh which is the Trans Himalaya.

There is a 24 km long, crevasse infested glacier we trek on to reach this pass. An extremely remote and unfrequented trek, this rewards the people who do it with some stunning scenery. Massive meadows carpeted with wild flowers, Gaddi shepherds with their huge flocks, sparkling streams, pristine glacial lakes, snow mountains all around and a long glacier, are just some from the trek before crossing the Kang La. Once you do, we enter another different world- "The Kingdom of Zanskar" with its arid lands and monasteries built into mountain sides and people so primitive that we feel we have just gone back in time.

Miyar Nala, as it is often known, is an exceptionally long valley, with the Miyar river running down into the Chandra Bhaga river at Udaipur over 50 kilometers below the Miyar Glacier. Starting in Miyar valley where wild flowers abound, the trek to Kang La (pass) involves traversing over the 24 km long Miyar glacier and a climb up to 5468 m.
View More
ITINERARY
Alt. in: ALTITUDE MAP
Expand All
WHAT'S INCLUDED WHAT'S EXCLUDED
Why Book with Bookmundi
What are customers saying about Bookmundi
Excellent
4.71 Average 332 Reviews

NEED HELP OR HAVE A QUESTION ABOUT THIS TOUR?
If you have any question about this tour or need help with planning a trip, please do not hesitate to get in touch with us. We're ready to help.
Get help
days 14 From US$ 1,350
Sorry, this product is currently not available.
Response Time: 3 hours Response Rate: 100% MAKE AN ENQUIRY