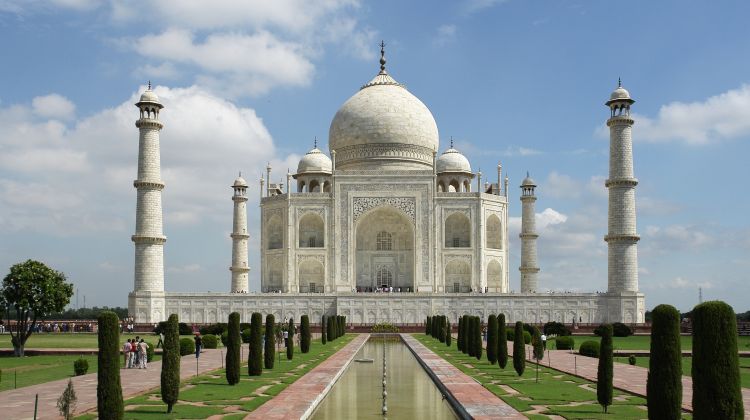 HIGHLIGHTS
Visit some of the major landmarks of India during this ten-day sightseeing tour of northern and central parts of India. Start your trip in Delhi and travel to Agra, Jaipur, Khajuraho, Varanasi and Sarnath. Take a rickshaw tour of Delhi, see its old markets, mosques and forts, among other places.

Your next stop is Agra, the Mughal city known for the iconic Taj Mahal. Travel to Jaipur, which also know as the "Pink City". Explore Varanasi, considered India's cultural capital. Go on a boat ride in the Ganges and visit Sarnath, ten kilometres away from Varanasi, where the Buddha gave his first sermon after achieving nirvana.

This tour comes to an end in Delhi. For more details, please go through the itinerary below.
View More
CUSTOMER REVIEWS
5 - Excellent
Based on 2 reviews
T
5 - Excellent
First trip to India
“We had an excellent tour of Golden Triangle and Varanasi thru Ghuam India Ghuam company. We highly recommend Praakash Chaubey as a great tour guide in Varanasi. He was very knowledgeable and spoke excellent English. He took us to many interesting places including Sacred Ganges River, many temples and world famous evening prayer ceremony. He told us many interesting facts and showed us real Varanasi. We highly recommend him if you visit Varanasi”
A
5 - Excellent
Really nice tour
“I had a really good experience with this tour. All the places visited was incredible, and India is curious, intense and surprising.
A special thanks to the two drivers Manoj from Golden Triangle and Vinod from Varanasi. And also the very good guide Niwas in Varanasi, that could show the city in a very particular local way.
Ghum India Ghum and all the staff team helped me a lot in all this period. Thanks a lot”
Ghum India Ghum responded to this review on 30 Sep 2019: “Dear Ms Luciana,
Greetings from Ghum India Ghum!!
Thank you for sharing such a lovely feedback. Its pleasure arranging your tour for Indian Golden Triangle with Varanasi tour package, Thank you for trusting us and everything end as per our plan. Your heart touching appreciating word keep us motivated to work hard and bring smile to all our guests. I will be happy to coordinate your next visit and urge you to write in with any requirement. My team and I look forward to maintaining a long and fruitful association with you.
Hope to welcome you back soon.
Warm Regards,
Sarvjeet Sankrit (Saurav)”
ITINERARY Expand All
WHAT'S INCLUDED WHAT'S EXCLUDED
Why Book with Bookmundi
What are customers saying about Bookmundi
Excellent
4.68 Average 345 Reviews

NEED HELP OR HAVE A QUESTION ABOUT THIS TOUR?
If you have any question about this tour or need help with planning a trip, please do not hesitate to get in touch with us. We're ready to help.
Get help
days 10 From US$ 600 See Group Discount
CHECK AVAILABILITY
Response Time: 3 hours Response Rate: 100% MAKE AN ENQUIRY