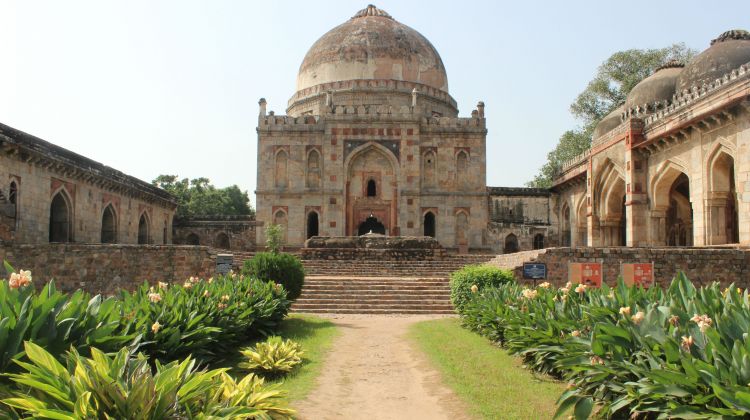 HIGHLIGHTS
New Delhi, the capital of India, is teeming with spectacular landmarks spanning centuries. On this private, guided tour, explore the medieval monuments of the city by day and attend a spectacular piece of modern entertainment with a musical fountain show by night.

Your guide will pick you up from your hotel in the morning and take you to the Sai Baba Temple. During the half an hour you spend there, your guide will tell you about the life of Sai Baba, a legendary spiritual master. Then make your way to Lodhi Garden. Spread over 90 acres, the garden contains the tombs of Muhammad Shah and Sikandar Lodi, both of whom ruled over this city centuries ago.

Learn more about the Mughal architecture in India during your visit to the magnificent Humayun’s Tomb, built in 1565 AD. It was the first garden tomb in the Indian sub-continent and a precursor to monuments such as the Taj Mahal. The tour will be an hour and a half long.

Time to see the highlight of the tour, the Akshardham Temple. This monument boasts a complex architectural style and consist of 234 ornately carved pillars, nine domes and more than 20,000 statues of various Hindu sages, saints and acharyas (teachers).

Finally, as the sun sets, the spectacular musical fountain show, the Cycle of Life, begins. This 15-minute show depicts the cycle of birth, life and death as mentioned in Hindu mythology.

Enjoy a quick bite of an Indian samosa with a glass of creamy masala tea before heading back to your hotel.

We have just returned from our trip to Rajasthan and have had a great holiday! I wanted to send an email to thank you and your team for making our holiday very memorable, from Ahmer for dealing with the initial enquiry and booking, Ragu for finalising the trip and Nishant for the daily phone calls to check everything was ok.

Drivers
Our biggest thanks goes to our driver, Mangiram, who was a real pleasure to have had with us on our trip. He was very knowledgeable and we always felt very safe with him during the long distances we were travelling. He is an asset to your company and we would be grateful if you would pass on our thanks to him personally. We were lucky to be given his nephew, Vikash, as a driver on the final part of our trip in Delhi and was also very good in making sure we made the best of the limited time we had in Delhi.

Company reps
We also thank the reps who visited us at the hotels and ensured a smooth check in and arranged activities for us. A special mention must be made of your rep Ahmed who met us at the airport in Delhi on the first day, again when we arrived from Udaipur and who also dropped us at the airport on our final day. Our flight was slightly delayed and he waited some time to welcome us.

As we also had a limited time in Delhi, he went above and beyond his duty to help us find some places where we wanted to shop and stayed with us until we had finished. Tour guides We booked some tour guides in Agra, Jodhpur and Udaipur through your company. All of the guides, Jugnoo, Surendra and Umad, were very passionate and knowledgeable, and we thoroughly enjoyed the time they spent with us explaining the rich history of the places we visited.”
Elisa's review for another GeTS Holidays PVT LTD tour
5 - Excellent
“My 10-year-old daughter and I had an incredibly memorable time in June on the 5-Day "Golden Triangle" Tour of Delhi, Jaipur (Beautiful and Historic Pink City) and Agra (Taj Mahal). We booked our tours with GeTS Holiday for a private tour and requested an upgrade of all hotels. We had an amazing time and enjoyed the flexibility that a private brings (vs. group tour). We could spend a more or less time in certain attractions and landmarks. The GeTS Holiday team assigned a representative to welcome us in each city. The tour guides were very experienced. Our driver, Mr. V. Sharma was world-class and unbelievable with his skills as we know it is not easy to drive in India. A special thanks to Ms. Ritu from the head office in Delhi for checking on us daily to ensure we were having none other than an excellent trip. I had contact with all of the staff at GeTS Holiday from the initial inquiry, reservation, welcome and farewell and they are highly professional and very responsive.

We enjoyed the rickshaw ride in Old Delhi and took a detour to visit the Gandhi museum. We particularly enjoyed Jaipur, the Pink City. The local music, costume, and warmth of the people were one to remember. We enjoyed every palace visit and also the elephant ride. In Agra, Taj Mahal was absolutely impressive. Also memorable was the scenic drive through the countryside after leaving Delhi and the Tech area.

We enjoyed the agenda (we visited ALL major landmarks (Delhi, Jaipur and Agra). Each day included hours of sightseeing and provided flexibility to decide plans for night time (rest, outside restaurants or other attractions). There is no way we would have been able to cover all the landmarks we visited in just 5 days IF we had taken a big group tour. We recommend a Private tour with GeTS Holiday to get the most out of your vacation to India and need the flexibility to accommodate a number of changes.

There is so much to see in India. We will always remember our trip there. What an amazing vacation!”
Read more GeTS Holidays PVT LTD reviews
WHAT'S INCLUDED WHAT'S EXCLUDED
Why Book with Bookmundi
What are customers saying about Bookmundi
Excellent
4.71 Average 318 Reviews

Other Practical InformationConfirmation will be received at time of booking. A dress code is required to enter places of worship. No shorts or sleeveless tops are allowed. Knees and shoulders must be covered. You may risk refused entry if you fail to comply with these dress requirements. In case your dress does not comply with above requirement, a free sarong is provided for your visit (Refundable Deposit Rs. 100). Please return the sarong at the exit. Temples are crowded during Sundays and holidays, you may have to wait in queue to get entry inside. The tour is dependant of weather conditions. In case if cancellation due to poor weather, the tour will be rescheduled or you’ll provided a full refund. COVID-19 Safety Measures

NEED HELP OR HAVE A QUESTION ABOUT THIS TOUR?
If you have any question about this tour or need help with planning a trip, please do not hesitate to get in touch with us. We're ready to help.
Get help
hours 07 SavingUS$ 3
You have unlocked exclusive savings:
6% OFF TODAY From US$ 54 US$ 51 See Group Discount
CHECK AVAILABILITY
Response Time: 3 hours Response Rate: 100% MAKE AN ENQUIRY