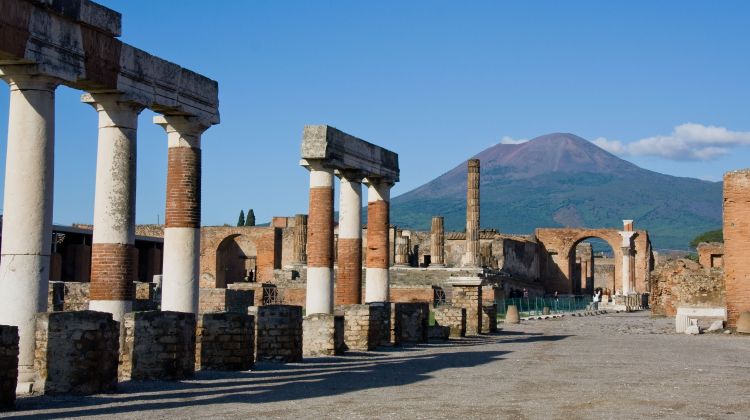 HIGHLIGHTS
The ancient city of Pompeii is still the most visited archaeological site in the world. The eruption of Vesuvius that buried has made it a immortal city.It is the only place in the world where tourists can admire the ancient Roman town completely preserved by the ash that covered it, walk the streets of Pompeii is how to use a time machine that takes us back to the morning of August 24, 79 AD.
The tour departing from Naples leaves at around 08:30 in the morning, after only a 30 minute ride on the highway you reach Pompeii. The standard walk in the archaeological excavations takes about 2 hours. Included in the cost of the tour there is a guided tour with audio guide (choice of English, Spanish, French, Portuguese and German) and / or live guide in English. After some free time they leave for Naples with exhaust Hotel.
View More
WHAT'S INCLUDED WHAT'S EXCLUDED
Why Book with Bookmundi
What are customers saying about Bookmundi
Excellent
4.71 Average 320 Reviews

Other Practical InformationThis tour is available with pickup from the Cruise Terminal, from the Airport, from the Central Train Station Children 3 and younger are complimentary. Hotel pickup is available from most centrally located Naples hotels. Please arrange pickup from your hotel or a nearby location when you call to confirm your reservation. At least 2 people are required for this activity to take place. You must present a valid passport on the day of the activity. You can cancel free of charge until 72 hours before your reservation starts. After that time, no cancellations, changes or refunds will be made.
NEED HELP OR HAVE A QUESTION ABOUT THIS TOUR?
If you have any question about this tour or need help with planning a trip, please do not hesitate to get in touch with us. We're ready to help.
Get help
hours 04 From US$ 55
CHECK AVAILABILITY
Response Time: 1 hour Response Rate: 100% MAKE AN ENQUIRY