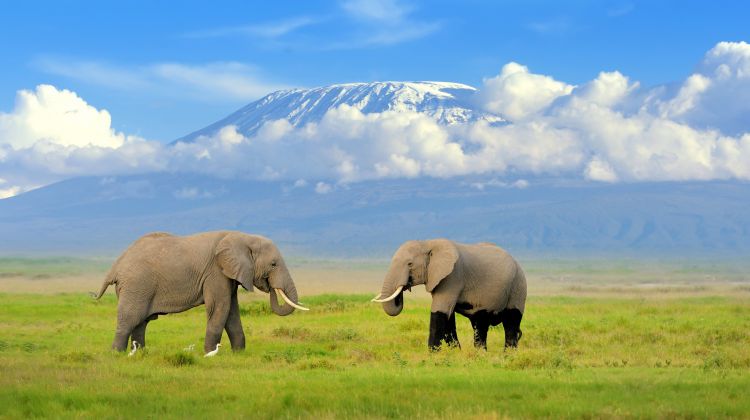 The tour starts by visiting the Masai Mara National Reserve, one of the most popular reserves in all of Africa lying in the Great Rift Valley in Kenya. Masai Mara shares a border with Tanzania’s Serengeti National Park and is essentially a continuation of this park, forming the Serengeti-Mara ecosystem. The Masai Mara is an African safari at its most iconic, a seemingly endless landscape filled with the drama of nature. Predators are thrillingly abundant, and the big cats define the rhythm on the plains every single day. Ungulates are diverse and plentiful, and astonishing numbers of four hooved animals cross the grasslands. Then there are the other giants, the elephants, giraffe, buffalo, hippo, even the elusive black rhino.

The next stop will be Lake Nakuru National Park, a gently undulating terrain with open bush and woodlands, typical of the dry rift valley vegetation. Twenty seven percent of the park is composed of the Lake Nakuru waters. The park has a large reserve of over 400 species of birds, which make it an ideal site of bird lovers. The park is also a sanctuary of rhinoceros with approximately 45 black and 31 white rhinoceros and the Rothschild's giraffe.

Finally, the tour takes you to Amboseli National Park, one of the most popular wildlife sanctuaries in Kenya. The Amboseli National Park’s ecosystem is mainly savannah grassland spread across the Kenya-Tanzania border right at the foot of Mt. Kilimanjaro, the highest mountain in Africa (5,896m). From the park, you can get a splendid view of Kili's snow-capped summit on clear days and also comprises of forested areas around some of its rivers and lakes. The park is famous for being the best place in Africa to get close to free-ranging elephants among other wildlife species, and its other attractions include opportunities to meet the Maasai tribe’s people, and its spectacular views of Mount Kilimanjaro. Melted snow from Kilimanjaro travels underground and surfaces in the center of Amboseli, providing marsh habitat and water for a variety of species. The low scrub vegetation makes wildlife easy to spot – including resident lions, leopards, cheetahs, hyenas, buffalos, zebras, giraffes and a variety of antelope species. Amboseli hosts approximately 400 bird species.
View More
CUSTOMER REVIEWS
4 - Very Good
Based on 1 review
A
4 - Very Good
gitelmana@gmail.com
“We had a great time...full of adventure and memories! Our guide was an excellent driver, maneuvering the terrains of Kenya!”
ITINERARY Expand All
WHAT'S INCLUDED WHAT'S EXCLUDED
Why Book with Bookmundi
What are customers saying about Bookmundi
Excellent
4.68 Average 357 Reviews

NEED HELP OR HAVE A QUESTION ABOUT THIS TOUR?
If you have any question about this tour or need help with planning a trip, please do not hesitate to get in touch with us. We're ready to help.
Get help
days 06 From US$ 1,014
CHECK AVAILABILITY
Response Time: 3 hours Response Rate: 100% MAKE AN ENQUIRY