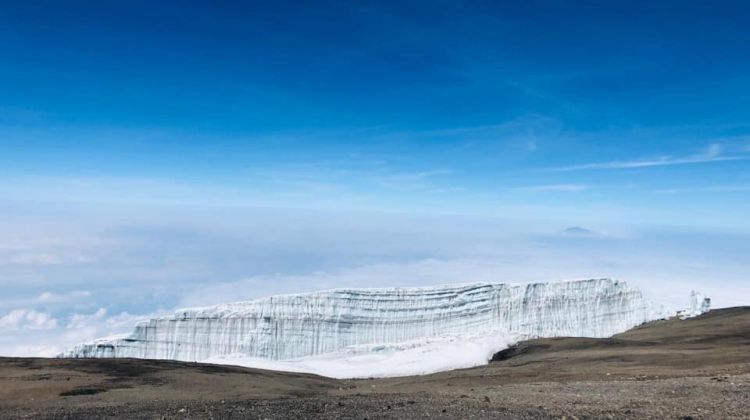 Tour with Flexible Booking Policy
HIGHLIGHTS
Join us on this seven-day, guided trip and reach the highest point in the African continent. The Machame route, also called the 'whiskey route', is one of the most popular routes used to climb Mount Kilimanjaro and our favourite as well. This route also has one of the highest summit success rates given the topography and nature of the route, which allows climbers to trek high and sleep low, hence making it a more favorable route for acclimatization.

In addition to higher chances of summit, the Machame route also offers some of the most spectacular scenery along the way to the top. It starts on the southwestern side of the mountain and proceeds steeply north, traversing the Shira Plateau and eventually joining Shira and Lemosho routes right after the Shira Cave Camp.

Although travelers can complete their journey to the top and back in six days using this route, adding a day more to the itinerary like we have done is recommended for the sake of acclimatisation.
View More
CUSTOMER REVIEWS ABOUT KILISA TOURS & SAFARIS
5 - Excellent
Based on 18 reviews
G
5 - Excellent
Gunnar's review for another Kilisa Tours & Safaris tour
“They did an amazing job, took care of my every need, and got me up the mountain in style. Big shout out to my guide Rama, my chef Kuruwa, and my porters Muhammad Ali, Sariri, Rezwan (Numba D), Moyo, and Salim.”
E
5 - Excellent
Emrah's review for another Kilisa Tours & Safaris tour
“Climbing Kilimanjaro is both a physical and mental challenge, we booked the trip to Kilimanjaro 10 months before going. Our first and all time inquiries were promptly replied to, and the fact that we were being regularly informed on various tips for our Kilimanjaro preparation through emails made everything so uncomplicated before arrived and for that gladly we came prepared.

And big thanks to Kilisa Tours & Safaris as they deserve it since we truly enjoyed every bit of the organization. The route choice to Kilimanjaro 8 Days Lemosho Route and that suited our time and budget. And the service provided in the Mountain was Top Notch; the guides were brilliant, friendly, knowledgeable, humorous when needed.”
Kilisa Tours & Safaris responded to this review on 03 Dec 2019: “Dear Emrah,

Thank you so much for making Kilisa tours your choice when you visited Tanzania
We are delighted to learn that you enjoyed every bit of organization we had for you.
We sincerely appreciate your feedback regarding your service.
Please rest assured that your feedback will be shared with the Kilisa's team.

We hope to see you again in future.

Kind regards,
Juliana”
C
4 - Very Good
Carolyn's review for another Kilisa Tours & Safaris tour
“The most memorable and exciting part of the holiday was of course the ascent of Kilimanjaro on summit day. It was exhilarating arriving at the peak after all the lead up to it and the views were fantastic.

The team had an excellent sense of humor, were honest and kind, and took great pride in their roles-we had a brilliant atmosphere in the camps because of this. Delicious meals were cooked up for us 3 times a day and a snack at tea time which surely helped us to the top. Tent were both laid out every night, including a separate mess tent for meals. All of good quality

We have no problem in recommend Kilisa Tours were exceptional and gave us the most unforgettable experience”
Kilisa Tours & Safaris responded to this review on 03 Dec 2019: “Dear Carolyn

NEED HELP OR HAVE A QUESTION ABOUT THIS TOUR?
If you have any question about this tour or need help with planning a trip, please do not hesitate to get in touch with us. We're ready to help.
Get help
days 07 SavingUS$ 199
You have unlocked exclusive savings:
10% OFF TODAY From US$ 1,990 US$ 1,791 See Group Discount
CHECK AVAILABILITY
Response Time: 2 hours Response Rate: 100% MAKE AN ENQUIRY