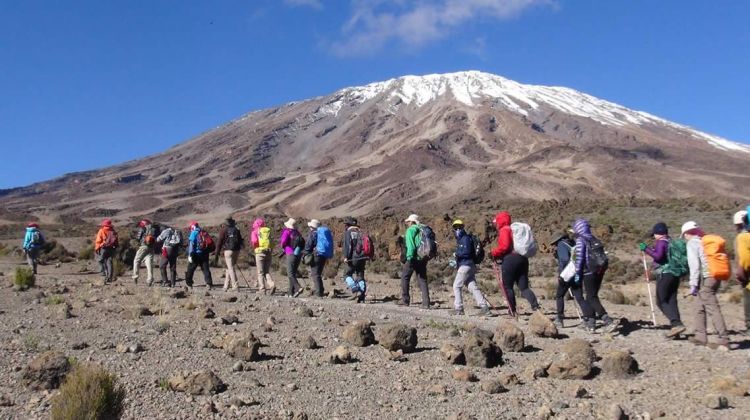 HIGHLIGHTS
The Mt. Kilimanjaro Marangu Route is a popular route on which nights are spent in huts and meals are taken in dining halls. It is the only route that ascends and descends using the same path and is often referred to as the “Coca-Cola” route. Hut accommodations are some of the main features of this route, offering the relative luxury of being able to sleep in covered lodging along the entire route. Mineral water, soft drinks, chocolate and beer are also sold at all the camps along this route.

The trek starts from the gate of Mt. Kilimanjaro National Park, about 50-minute drive from your hotel. The Marangu route passes through rainforests (which teems with birds and colobus and other monkeys), alpine meadows and lush vegetation (with giant lobelias and senecios) until you reach the snowy summit. At some spots along the route, you will have magnificent views of snow-laden peaks of Kilimanjaro, Kibo and Mawenzi.

Mt. Kilimanjaro climbing is composed of a number of crew which includes the chief guide, assistant guide, cook and porters. This professional group has undergone extensive training to ensure the safety and comfort of climbers during the challenging trek.
View More
CUSTOMER REVIEWS ABOUT MIGRATION VENTURE AFRICA LTD
5 - Excellent
Based on 16 reviews
A
5 - Excellent
Review for another Migration Venture Africa Ltd tour
“From Amos greeting us at the Kilimanjaro airport, to Guides, and all of the porters and our cook helping us on our 7 days hike up Mount Kilimanjaro.
They run a very competent and professional Kilimanjaro climbing company that supplied us with everything we needed to succeed on our summiting Mount Kilimanjaro hiking the Machame route. Our expectations were regularly exceeded with all aspects of our trip! The food was fantastic, the tents and sleeping bags kept us warm and the charming personalities of the whole team who took much enjoyment in helping us because they clearly love their jobs! We were treated amazingly well.
This is the only company I would use to climb Mount Kilimanjaro again.”
M
5 - Excellent
Mitra's review for another Migration Venture Africa Ltd tour
“Actually, On 13th of Dec I booked Kilimanjaro mount trekking via Machame Route with my family. The volunteers were so amazing and helpful. Looking forward to doing more tours with you.”
V
5 - Excellent
Victoria's review for another Migration Venture Africa Ltd tour
“Thanks a lot for unbelievable trip to Mikumi park. We were picked up at our hotel in time. The way to the national park was long but interesting, our driver told about Tanzania) The food during our trip was very tasty. Accomodation was wow!! The whole lodge is only for two)) But the main thing is ther nature ! We saw a lot of animals and birds. Unfotunately we didn't meet lions and gepard(( May be next time!”
Read more Migration Venture Africa Ltd reviews
ITINERARY
Alt. in: ALTITUDE MAP
Expand All
WHAT'S INCLUDED WHAT'S EXCLUDED
Why Book with Bookmundi
What are customers saying about Bookmundi
Excellent
4.69 Average 364 Reviews

QUESTIONS AND ANSWERS Find answers to the most frequently asked questions about this tour.
Ask a question
NEED HELP OR HAVE A QUESTION ABOUT THIS TOUR?
If you have any question about this tour or need help with planning a trip, please do not hesitate to get in touch with us. We're ready to help.
Get help
days 05 From US$ 1,300 Flat Rate
CHECK AVAILABILITY
Response Time: 2 hours Response Rate: 100% MAKE AN ENQUIRY