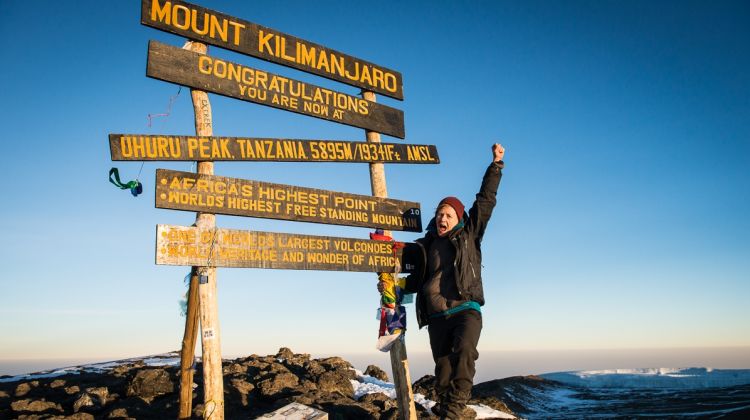 HIGHLIGHTS
Known as the "Coca-Cola" route, the Marangu route is a classic trek on Mount Kilimanjaro. It is the oldest, most well established route. Many favor the Marangu route because it is considered to be the easiest path on the mountain, given its gradual slope. It is also the only route which offers sleeping huts in dormitory style accommodations.

The minimum days required for this route is five, although the probability of successfully reaching the top in that time period is quite low. Spending an extra acclimatization day on the mountain is highly recommended when climbing Klimanjaro using the Marangu route.

However, despite its immense popularity, we avoid leading climbs on the Marangu route. The route has the least scenic variety of all the routes because the ascent and descent are done on the same path and it is the most crowded route for that reason. Marangu is favored during the rainy season, where the hut accommodations are preferred over wet ground, or for those who only have five days to climb Kilimanjaro.

NB: With small Additional cost we can book for you accommodation before or/and after summiting Mount Kilimanjaro.
View More
CUSTOMER REVIEWS ABOUT DAHLIA AFRICA
5 - Excellent
Based on 20 reviews
Geraldine's review for another Dahlia Africa tour
5 - Excellent
“Dahlia Africa suggested this route to us as it is 9 days which minimizes your risk of altitude sickness due to more acclimatization time. At many points we felt as though we were the only people on the mountain due to the route being a less commonly used one. Dahlia Africa were faultless from beginning to end, our guides Linus and Brian were extremely knowledgeable and motivational, keeping our spirits high at some of the trickier points of the track. The food cooked for us by Asha, the chef, was always delicious and she always ensured we were happy with what was on the menu so we were getting enough food to keep us going.”
Hellen's review for another Dahlia Africa tour
5 - Excellent
“If we could give this safari tour company more than five stars, we would. They helped us in creating a truly EPIC African Safari & KILIMANJARO TREKKING!! Everything exceeded our expectations. We told them our interests and priorities for the trip and our agents worked hard to make sure it was all we wanted and more. Even after a few changes with travel dates.
Our safari tour designer provided absolutely professional and first-class service. Every booking and guide, porters, driver and staff person we met were exemplary, and the suggestions they made for us were fantastic. As first-time travelers to Africa, with group of 10 students we had many questions, and our agent responded promptly and in detail to all our questions. Brian, the companys managing director and his partner met with us in person not once but twice - that level of service is something we have not encountered before. Our Kili guide and Safari driver was one of the most knowledgeable and friendly tour staffs we have ever met - we were sad to leave them. We cannot recommend this safari tour company highly enough! Our expectations were high, and they were exceeded!”
Review for another Dahlia Africa tour
5 - Excellent
“During our trip Everything was beyond perfect! The guides knowledge about wildlife and nature was beyond everything, their love to nature and the community they take us has changed our life, every moment will be cherished for a lifetime.”
Read more Dahlia Africa reviews
ITINERARY
Alt. in: ALTITUDE MAP
Expand All
WHAT'S INCLUDED WHAT'S EXCLUDED
Why Book with Bookmundi
What are customers saying about Bookmundi
Excellent
4.71 Average 318 Reviews

Other Practical InformationNB: With small Additional cost we can book for you accommodation before or/and after summiting Mount Kilimanjaro. Children bellow 13 years of age must be accompanied by adult.
NEED HELP OR HAVE A QUESTION ABOUT THIS TOUR?
If you have any question about this tour or need help with planning a trip, please do not hesitate to get in touch with us. We're ready to help.
Get help
days 06 From US$ 1,650 See Group Discount
CHECK AVAILABILITY
Response Time: 3 hours Response Rate: 100% MAKE AN ENQUIRY