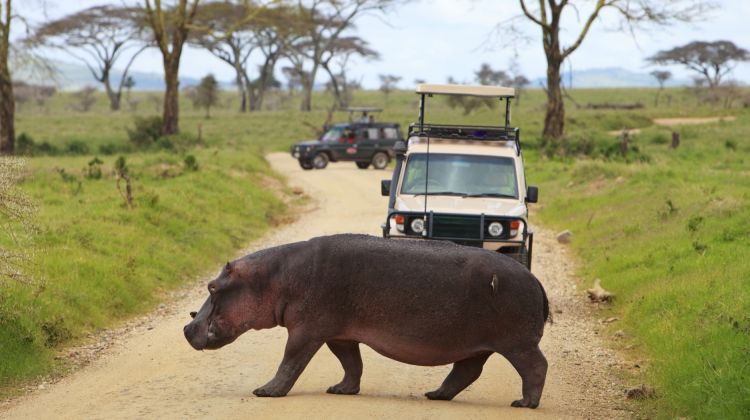 HIGHLIGHTS
Our 3-day African safari, which specifically includes the Lake Manyara National Park, Ngorongoro Crater & Tarangire National Park has been designed to offer you a short but intense Tanzanian Northern Circuit safari experience, for a shorter and time constrained period of 3 days / 2 nights. You will experience the excitement of game viewing in three of the most spectacular national game parks in Tanzania.

This unforgettable African safari tour will take you to the Ngorongoro Crater, featuring one of the highest concentrations of game in Africa. Here you will witness an amazing spectacle of African wildlife – inside a self-contained world teeming with animals.

We will also visit Lake Manyara National Park, one of Tanzania’s most dramatically located wildlife areas, consisting of a shallow but huge soda lake, at the foot of the Great Rift Valley’s western escarpment.

Finally, your African safari tour will also take you to the Tarangire National Park, which features some of the greatest concentration of game in Tanzania – second only to the Ngorongoro Crater – but less crowded and unspoiled – possessing a wild beauty. The size of the selected Ngorongoro Crater, Lake Manyara and Tarangire National Parks, make them a perfect choice for our shorter safaris.
View More
CUSTOMER REVIEWS ABOUT ENOSA EXPEDITIONS
5 - Excellent
Based on 72 reviews
J
5 - Excellent
Jennifer's review for another Enosa Expeditions tour
“Enosa Expeditions is absolutely the best company with which to summit Kilimanjaro. My wife and I just went in July. We contacted several companies before choosing Enosa to plan our trip, and we were glad we did. Noel (A manager) was very, very helpful to communicate with by e-mail and phone. He listened closely to what we wanted, helped us make decisions based on his close knowledge of Tanzania, and responded patiently and promptly to my endless lists of questions...even helped me learn a few words of Swahili.
The hiking was beautiful, challenging but not overwhelming. Everyone in our group was able to summit because of the guiding, leadership and support of all the team. The guides, assistant guides, chef, and porters are excellent. Very professional and helpful. We choose Enosa because of its reputation for safety and success.
The only way to see the real Tanzania is with Enosa Expeditions. Their first priority is that you have the trip of your lifetime. They have a wonderful staff of friendly and helpful locals. The food is amazing. The guides are simply the best of the best. Regan and John are extremely knowledgeable, helpful and friendly for Mount Kilimanjaro.
We think the company offers some unique insights/experiences into the country because it is owned by Tanzanians.
Although I don't know when my schedule will permit it, I am already looking forward to my next trip with Enosa.”
N
5 - Excellent
Nesh's review for another Enosa Expeditions tour
“Good and organized. Very polite. The food was very good and a lot. All the people on the trek were amazing. Thank you.”
J
5 - Excellent
Jennifer's review for another Enosa Expeditions tour
“Our safari with Enosa Expeditions to Ngorongoro, Serengeti, Lake Manyara, Tarangire and Lake Victoria even exceeded our expectations which we admit were very high. Reliable, courteous, friendly and knowledgeable are just a few of the words that apply to our wonderful driver-guide Erastus who was not only an excellent driver but also, he was knowledgeable about which places to go to and what to see. We were able to see everything we wanted: elephants, zebras, hippos, giraffes, "the big 5" and many more.
Their cars are very comfortable and their guides all speak fluent English. Our guide Erastus brought us to beautiful places and knew exactly what we wanted to do and see!
If you wish to get the safari of your dreams, I would recommend that you use this company to make your dreams come true! We had such a great time in Tanzania and I'm pretty sure Enosa Expeditions had a lot to do with that. They took care of every single detail of the entire trip, making the whole experience remarkable”
Read more Enosa Expeditions reviews
ITINERARY Expand All
WHAT'S INCLUDED WHAT'S EXCLUDED
Why Book with Bookmundi
What are customers saying about Bookmundi
Excellent
4.68 Average 345 Reviews

NEED HELP OR HAVE A QUESTION ABOUT THIS TOUR?
If you have any question about this tour or need help with planning a trip, please do not hesitate to get in touch with us. We're ready to help.
Get help
days 03 From US$ 1,300
CHECK AVAILABILITY
Response Time: 1 hour Response Rate: 100% MAKE AN ENQUIRY