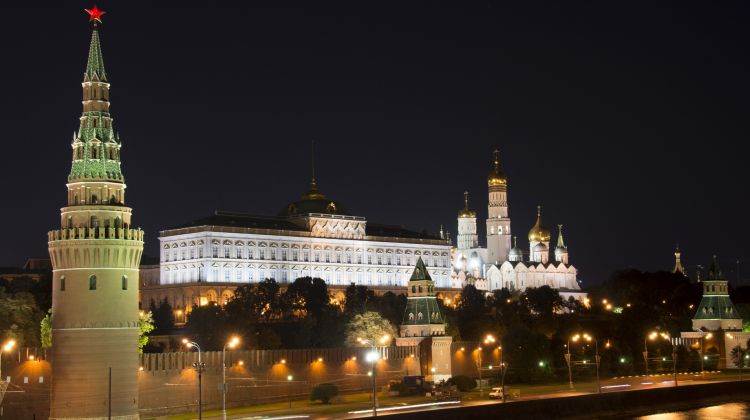 HIGHLIGHTS
Learn about the history of Moscow and Russia from an experienced guide on a 4-hour walking tour. You will visit the most notable city attractions, such as the Red Square, Bolshoi Theatre and The Kremlin. Your guide will take you inside the Kremlin and show you where the Russians Czar’s were crowned and where some of the most fateful decisions in world history were made.

Your guide will pick you up from your hotel and head toward the Kremlin. The tour will start at Kutafia tower and will continue under Trinity Tower after which you will officially enter The Kremlin.

The tour guide will take you past the State Kremlin Palace, a Soviet style building initiated by Nikita Khrushchev. The tour will continue to Ivan square past two marvels of truly Russian magnitude – Tsar Cannon and Tsar Bell. The culmination of your walk through the Kremlin will be the arrival at Cathedral Square a place that can be considered the cradle of Russian tsars and the Russian empire.The churches located on the Cathedral square are some of the most notable relics of the Russian orthodox religion and Russian heritage as a whole.

After exploring the Kremlin your guide will take you to Red Square, past the mausoleum all the way to St.Basil's Cathedral. A true landmark of Russia and Moscow and a place where every visitor should take a photo. From Red Square you will continue to GUM: arguably the most beautiful and well-known Russian mall built at the end of the 19th century. After visiting GUM you will stroll down to the Bolshoi Theatre a landmark that you must see before leaving Moscow.

Afterwards, your guide will take you to Lybyanka Square where you will see the headquarters of the former KGB and hear the legends and stories of the Soviet regime. You will continue on to Myasnitskaya street all the way to Chistye Prudy - a popular place among moscovites to take a stroll. Afterwards, the guide will be happy to recommend and take you to a restaurant or a souvenir shop where you will be able to buy some memorable souvenirs from your trip.
View More
WHAT'S INCLUDED OPTIONAL ADDONS (Available during check-out) WHAT'S EXCLUDED
Why Book with Bookmundi
What are customers saying about Bookmundi
Excellent
4.72 Average 311 Reviews

Other Practical InformationDress comfortably. Make sure to check the weather forecast before leaving your place of stay.
NEED HELP OR HAVE A QUESTION ABOUT THIS TOUR?
If you have any question about this tour or need help with planning a trip, please do not hesitate to get in touch with us. We're ready to help.
Get help
hours 03 From US$ 130
CHECK AVAILABILITY
Response Time: 2 hours Response Rate: 100% MAKE AN ENQUIRY