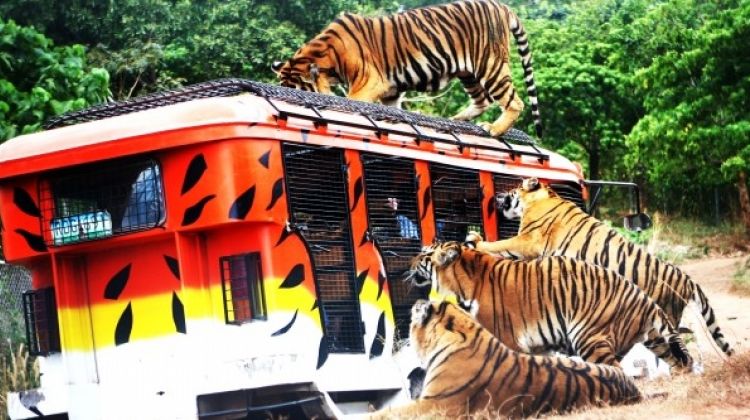 HIGHLIGHTS
Begin this adventure with an early morning drive to the former US naval facility in Subic, Zambales, 75 miles northwest of Manila.

Known as the Subic Naval Base, it was America’s largest naval facility in the Pacific region until the Mt. Pinatubo eruption in 1991 led to its abandonment. The area has since been converted into a modern free port and tourism zone.

Witness the aftermath brought by Mt. Pinatubo’s eruption (considered the strongest volcanic eruption in the last century) while passing through the provinces of Bulacan and Pampanga. Then visit a JEST Camp (Jungle Environmental Survival Training Camp) where indigenous people called Aetas demonstrate survival skills in a tropical rain forest. Experience a Zoobic Safari with its ride-through tiger enclosure (the only one of its kind in the Philippines.)

There is an option to stop by duty free shops inside the Freeport Zone before the return trip to Manila.
View More
WHAT'S INCLUDED WHAT'S EXCLUDED
Why Book with Bookmundi
What are customers saying about Bookmundi
Excellent
4.70 Average 323 Reviews

Other Practical InformationHOTEL PICKUP SCHEDULE: Pickup times are approximate. You will receive a precise pickup time upon calling to reconfirm your tour 24 hours before departure. Please be in the hotel lobby 20 minutes prior to given departure time.
NEED HELP OR HAVE A QUESTION ABOUT THIS TOUR?
If you have any question about this tour or need help with planning a trip, please do not hesitate to get in touch with us. We're ready to help.
Get help
hours 08 From US$ 138 See Group Discount
CHECK AVAILABILITY
Response Time: 3 hours Response Rate: 100% MAKE AN ENQUIRY