SAVE UP TO $1300
Unlock 5% Discount See all deals »
LIMITED OFFER ends in:
Request for call time received
You have successfully booked a call. Our travel consultants will get back to you around the requested time.
Okay, Got it!
BOOK A NEW YEAR 2020 CALL WITH OUR TRAVEL CONSULTANTS
Home  ›  Asia Tours  ›  India Tours  ›  Parang La Base Camp Tours  ›  Adventure And Sport  ›  Trekking  ›  Parang La Trek With Chandertal: Manali To Spiti To Ladakh 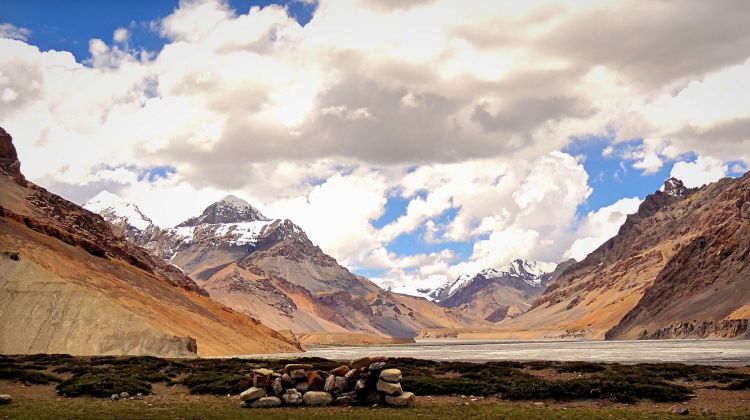 HIGHLIGHTS
The long and winding trek from Spiti valley to Changthang (Ladakh) and then onto Tibet is a trans-Himalayan trek which retraces the ancient and renowned trade route between Spiti and Tibet.

Parang La is perched at an altitude of 5,600mts and connects the Spiti valley to Ladakh, a high-altitude mountain desert. On the Spitian side of Parang La, the Parilungbli river meanders and the trekking trail runs parallel to it and ascends up to the pass and opening into Ladakh.

The trek through the high-altitude mountain desert originates in Kibber in Spiti Valley – the highest inhabited village in the world and culminates at the village Karzok by the banks of the beautiful Tso Moriri, Ladakh. The meadows of Kibber are filled with exotic wildlife such as the Himalayan snow leopard and the magnificent horses of Spiti. The trail cuts across a gorge that leads to Dulma. From Dulma, there is another steep route to the meadows of Thaltak.

We will also trek on to the Rupshu plains of the Changthang Plateau, which also happens to be the eastern-most tip of the Tibetan Plateau. Keep your eyes open for sightings of rare Himalayan wildlife.

From here, the trail meanders through Datang Yongma, Racholemo, Norbu Sumdo and then crosses over to Chumik Shilde. From here we will reach the southern bank of Tso Moriri, a lake of unparalleled beauty. The lake runs almost 27 km in length and 8 km in width. During the mating season, the lake is a playground for Brahmini ducks, black-necked crane and bar-headed geese to name a few. The trail runs alongside the shore of the lake and will finally end at Karzok. Set in a spectacular setting Karzok is one of the highest villages in the world at 4595 meters. Karzok is connected by road to Leh, the capital of Ladakh. There is another road leading to Manali via the famed picturesque Leh-Manali highway. you can choose if want to continue to Leh or get back to Manali. In Leh we'll stay for two nights in a nice homestay and with ample of time to explore the town of Leh and it's famous monasteries
View More
ITINERARY
Alt. in: ALTITUDE MAP
Expand All
WHAT'S INCLUDED OPTIONAL ADDONS (Available during check-out) WHAT'S EXCLUDED
Why Book with Bookmundi
What are customers saying about Bookmundi
Excellent
4.72 Average 286 Reviews

Other Practical InformationThis trip requires physical fitness. Trekkers must be fit and have sufficient stamina to cover 5 km of distance in 30 minutes without stress. Guests should be able to carry a 10 to 15 kg expedition backpack. Please ensure, for your own trekking pleasure you pack light and only the absolute essentials. This tour is not recommended for those with heart problems, high blood pressure, asthma, or epilepsy. No matter how much you train and how fit you are, you still might develop life-threatening altitude illness. If you do not feel well at any point on the trip – suspect altitude illness and immediately inform your guides. When in doubt- always descend immediately to lower elevation! Remember to bring your camera! Be patient and respectful towards your fellow climbers. Remember, up there, you only have your wits and your fellow climbers. We humbly ask of you, never ever argue with your guides and instructors while on the trek. Remember, they only have your best interest in mind and any decision they take is taken keeping your safety and the success of the expedition in mind. Any and all decisions taken by the guides and instructors will be deemed as final.
NEED HELP OR HAVE A QUESTION ABOUT THIS TOUR?
If you have any question about this tour or need help with planning a trip, please do not hesitate to get in touch with us. We're ready to help.
Ask a question
Valentine's SUPER SALES Unlock Deal
days 16 From US$ 1,335
Unlock US$ 67 in extra savings CHECK AVAILABILITY
Response Time: 3 hours Response Rate: 100% MAKE AN ENQUIRY