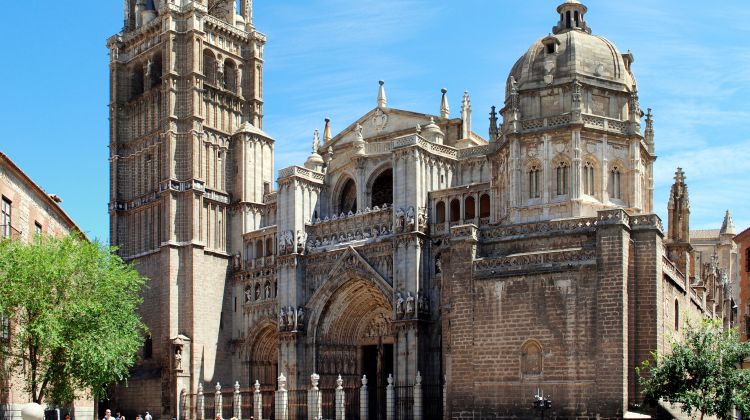 HIGHLIGHTS
Your day starts in Central Madrid where you'll meet your guide and small group then hop onto a private, air-conditioned minibus for the hour's drive to Toledo. As you traverse the beautiful countryside, your guide will give you an introduction to the history of the city and explain how it was shaped by Christians, Muslims, and Jews over some 2,000 years.

Before entering the city, you'll stop at one of its most famous viewpoints for a few pictures, then make your way to the jaw-dropping San Martín bridge, which has been Toledo's most picturesque entry-point since the 14th-century. Wind your way up medieval streets, passing the beautiful monastery of San Juan de los Reyes before stepping inside an artisanal sword-making workshop. Toledo has been a center of steel-working since roughly 500 BC, outfitting real warriors and literary ones (like the famous Don Quixote, whose adventures take place throughout the region surrounding the city). In the workshop, you'll go behind the scenes to see how modern artisans are still using centuries-old techniques to produce functional works of art.

Your next stop is the Toledo Cathedral, the finest Gothic church in Spain and one of the most impressive in Europe. Your guide will give you a full tour of this architectural masterpiece, including paintings by masters like El Greco, then you'll head over to the Tower of San Ildefonso-the highest viewpoint in Toledo-for stunning, 360-degree views over the city and nearby Alcázar.

Lunch is not included, but your guide will give you recommendations on where to go to sample Toledan specialties like lamb, partridge and marzipan.

After lunch, you'll get back in your private minibus and head out into the countryside to see the famous windmills of La Mancha. These windmills became famous in the 17th century when they were attacked in fiction by the knight errant, Don Quixote. You'll get to step inside the only working windmill in the area and learn about its literary importance as well as the function it once served in the town.

After your tour, we'll stop off at the tiny restaurant inside the windmill and treat you to a tasting of manchego cheese with a glass of wine, beer, or a soft drink. Then you can step out onto the patio for lovely views over the surrounding countryside.

Relax and indulge yourself - It's a quick hour and a half back to Madrid where you'll arrive with plenty of time to prepare for a late Spanish dinner.
View More
CUSTOMER REVIEWS ABOUT WALKS LLC
5 - Excellent
Based on 41 reviews
Steven's review for another Walks LLC tour
5 - Excellent
“It was as hard not to fall in love with Josephine as well as Paris during this tour. We were there with a large (and very tired) group of students that arrived from the US but Josephine perked them right up with stories of beheadings, infidelity, and other blood-ridden mortal tragedy. Next to being charming and humorous (and sometimes a bit teachy), she was also very knowledgeable to the extent that she could discuss bilingualism in Paris throughout the years (which was a specific interest of the group) as well as historical derivations of subway names (which, I believe, was a dare of mine). Great day!

~ Uncle Steven”
Rita's review for another Walks LLC tour
5 - Excellent
“Outstanding tour and guide. I cannot say enough good about Raphael- she was personable, extremely knowledgeable, and very enthusiastic. It was a walk not only through fabulous art but brimming with history. (P.S. my prediction: her baby will be born talking!).”
Robin's review for another Walks LLC tour
5 - Excellent
“My guide, Josephine, was fantastic! She was interactive, engaging, and super-friendly. She even suggested a fantastic place for me to curb my craving for a Nutella and banana crepe. I'll be back in Paris this summer with friends and plan on taking the same tour again.”
Read more Walks LLC reviews
WHAT'S INCLUDED WHAT'S EXCLUDED
Why Book with Bookmundi
What are customers saying about Bookmundi
Excellent
4.72 Average 298 Reviews

Late arrivals & no-shows:
No refunds or re-bookings can be provided for late arrivals or no-shows after tour commencement or departure.

Other Practical InformationGratuities to guides are appreciated but never obligatory. Please note that the tour meeting time is 15 minutes prior to the start time. No refunds or re-bookings can be provided for late arrivals or no shows after tour commencement or departure. Unfortunately, we are unable to accommodate guests with mobility impairments, wheelchairs or strollers on this tour. Toledo Cathedral can be subject to unforeseen closures due to particular celebrations. In the case where sites are closed, we will give you explanations from the outside. Please remember that Toledo Cathedral is a holy place, and attire must be appropriate for the visit. Both men and women are asked to wear clothing that covers at least the shoulders and knees. Walks cannot be held responsible for denied entry due to improper dress. Photography is not permitted inside Toledo Cathedral. Please note that guests may only carry small handbags. Larger backpacks are not allowed inside Toledo Cathedral. Comfortable walking shoes recommended.
NEED HELP OR HAVE A QUESTION ABOUT THIS TOUR?
If you have any question about this tour or need help with planning a trip, please do not hesitate to get in touch with us. We're ready to help.
Ask a question
hours 10 From US$ 0
Sorry, this product is currently not available.
Response Time: 1 hour Response Rate: 100% MAKE AN ENQUIRY