SAVE UP TO $1300
Unlock 5% Discount See all deals »
LIMITED OFFER ends in:
Request for call time received
You have successfully booked a call. Our travel consultants will get back to you around the requested time.
Okay, Got it!
BOOK A NEW YEAR 2020 CALL WITH OUR TRAVEL CONSULTANTS
Home  ›  Europe Tours  ›  England Tours  ›  London Tours  ›  Sightseeing, Attractions, Culture And History  ›  City Sightseeing  ›  London In A Day: Tower Of London, Westminster Abbey 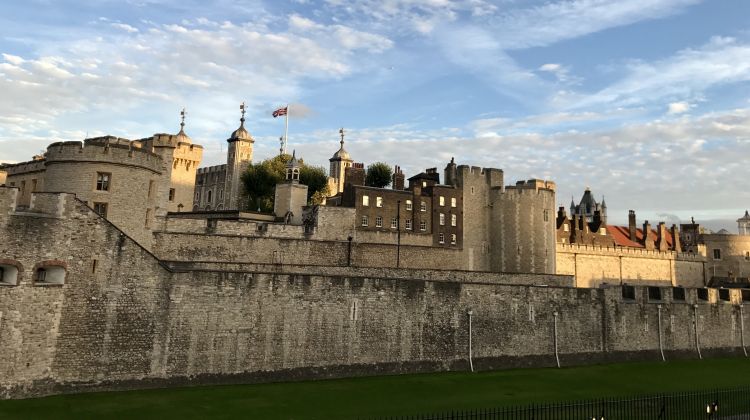 HIGHLIGHTS
Your day begins in Westminster Abbey, where you’ll take advantage of pre-reserved tickets to visit England’s most hallowed church, before most of the crowds arrive. As you stroll across the beautiful Cosmati pavements and peer up into the elaborate vaulted ceiling, your guide will introduce you to the church’s tumultuous history, which mirrors that of England. Every corner of the church is packed with historical interest and rich symbolism, including heart-wrenching war memorials, chapels maintained by ancient orders of chivalry, the tombs of national heroes, religious and royal relics, and of course, hundreds of years of royal weddings, coronations and funerals.

Leaving the spiritual heart of England, you’ll avoid the large crowds gathered in front of Buckingham Palace to watch the Changing of the Guard and head to Wellington Barracks instead. This is where most of the ceremony actually takes place, including the band’s performance and the highly-formal uniform checks. It’s even more surprising then that so few visitors come here to watch the Changing of the Guard, meaning you can get right within arm’s reach of the guards as they pass.

It’s time for a little surprise now. On the other side of the St. James’s Park you’ll step into the Horse Guards Parade to witness a much less famous but perhaps even more impressive ceremony: The Changing of the Queen’s Life Guard, an elite cavalry regiment mounted on exquisitely-bred, specially-trained horses. As you watch the guards go through the ceremony, your guide will explain the significance of everything from the armor they wear to the colors on their uniforms.

Your next stop is Trafalgar Square, the geographic center of London and one of the city’s most iconic public spaces. While you marvel at the size of the bronze lions and the enormous triumphal column, your guide will tell you about the naval history that gives the square its name as well as about the dashing Admiral Nelson whose fame during his short life makes modern celebrities seem like total amateurs. You’ll also come across some unexpected curios, like the smallest police box in the world and a statue of George Washington that sits on a micro-plot of American soil.

After a break for lunch (your guide will recommend a range of great places to eat) you’ll reconvene for a short walk down to the Thames for a scenic river cruise that will take you past a number of London landmarks like the Shard, the Gherkin, St. Paul’s Cathedral, the London Eye and more. Disembark at the foot of Tower Bridge and head down into the engine room, which used to raise the bridge multiple times a day as large ships went back and forth on the river. Then climb to the top level, take a deep breath, and stroll across the glass walkway that connects the towers. From up there, you’ll enjoy amazing views over the river, the Tower of London, and the people crossing the bridge far below you.

Your last stop, the Tower of London, is also the most impressive. With pre-reserved tickets at the quietest time of day, you won’t have to battle crowds to enjoy nearly 1,000 years of bloody royal feuds, improbable jailbreaks, jewel heists, menacing ravens, and even a ghost or two. Your guide, who has an expert grasp of British history, will regale you with the often hair-raising stories of this royal stronghold, jail, zoo, and sometimes an execution block, including the mystery of two lost royal boys that still raises the hairs of everyone who hears it. There is no better, or more entertaining, way to learn about the dynastic battles that shaped England and created the country we know as the United Kingdom. At the end, you have time to see the Crown Jewels on your own.

As a final treat, when your guide departs, you will have ample time to see the Crown Jewels (which are inside the Jewel House in the Tower). These aren’t just the largest collection of coronation regalia in the world, they are also the only ones in Europe that are still being used by a royal family.

Every attraction on this tour is a bucket list destination. By combining them all, we’ve put together the ultimate day of sightseeing in Europe’s most vibrant capital city. Your expert local guide will be with you every step of the way to point out the world of facts, stories and interesting details hiding around every corner.
View More
WHAT'S INCLUDED WHAT'S EXCLUDED
Why Book with Bookmundi
What are customers saying about Bookmundi
Excellent
4.72 Average 286 Reviews

Late Arrivals & No Shows:
No refunds or re-bookings can be provided for late arrivals or no shows after tour commencement or departure.

Other Practical InformationGratuities to guides are appreciated but never obligatory. Please note that the tour meeting time is 15 minutes prior to the start time. No refunds or re-bookings can be provided for late arrivals or no shows after tour commencement or departure. Please note that for security reasons bag searches will take place at Westminster Abbey, Tower Bridge and at the Tower of London. Photographs are not permitted inside Westminster Abbey. Please be advised that there is no Changing of the Guard on Saturdays. On days that 'Changing of the Guard' does not take place, guests will see Horse Guards Parade. Unfortunately, we are unable to accommodate guests with mobility impairments, wheelchairs or strollers on this tour. Comfortable walking shoes recommended.
NEED HELP OR HAVE A QUESTION ABOUT THIS TOUR?
If you have any question about this tour or need help with planning a trip, please do not hesitate to get in touch with us. We're ready to help.
Ask a question
Valentine's SUPER SALES Unlock Deal
hours 08 From US$ 0
Sorry, this product is currently not available.
Response Time: 2 hours Response Rate: 100% MAKE AN ENQUIRY