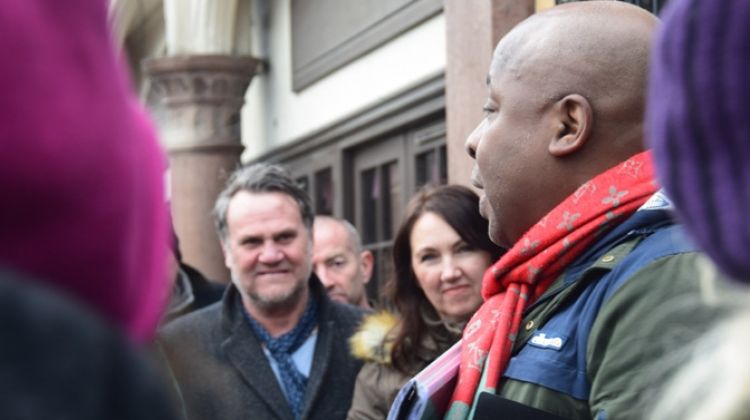 HIGHLIGHTS
The Gangster London tour offers you the unique opportunity to have a fun afternoon with Lock Stock And Two Smoking Barrels actor Vas Blackwood.

Vas Blackwood will take you around the Whitechapel and Bethnal Green areas and show you the locations of real life gangster events and film locations from Lock Stock and Two Smoking Barrels plus many others.

Vas Blackwood, an actor known for playing many roles on film and TV, will share anecdotes at each location. True stories such as how Ronnie Kray killed George Cornell or how Freddie Foreman disposed of bodies for the Krays and anecdotes from the set about Vinnie Jones first day filming.

This 2 hour walking tour is a fun and different way of exploring the Kray twin’s stomping ground and has been recommended by legendary gangster “Mad” Frankie Fraser.

The tour starts at the the Blind Beggar pub; it takes in Repton Boys Club the church where the twins had their funerals and other locations which played a pivotal role in the lives of the Krays and other gangsters and which turned them from mere gangsters into celebrity icons.

Through his role as an onscreen gangster, Vas has rubbed shoulders with some of London’s ex-gangsters and their associates, including Freddie Foreman, Dave Courtney, Barbara Windsor and gangster turned actor Lenny McLean. Now you have the chance to rub shoulders with Vas and have a fun filled afternoon on tour.
View More
WHAT'S INCLUDED WHAT'S EXCLUDED
Why Book with Bookmundi
What are customers saying about Bookmundi
Excellent
4.71 Average 334 Reviews

NEED HELP OR HAVE A QUESTION ABOUT THIS TOUR?
If you have any question about this tour or need help with planning a trip, please do not hesitate to get in touch with us. We're ready to help.
Get help
hours 02 From US$ 28
CHECK AVAILABILITY

Tour is operated by : Brit Movie Tours
Welcome back!