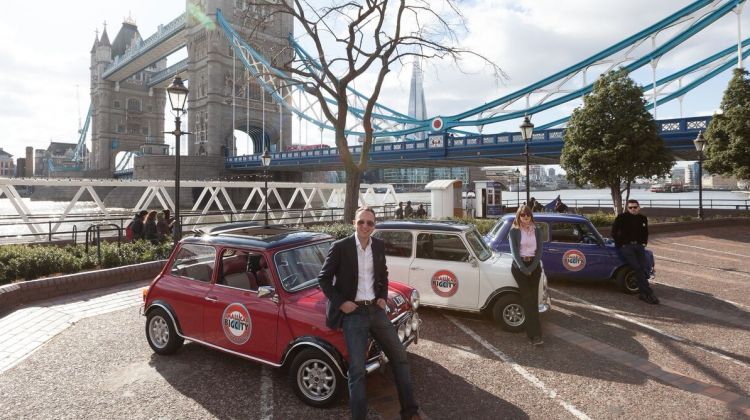 HIGHLIGHTS
See where the most successful British band of all time lived, worked and made history. Be chauffeur driver round the key areas of London that defined the Fab Four in a restored classic Mini Cooper with your very own passionate local guide to bring their story to life.

Their musical legacy needs no introduction. Their songs manage to transcend class, gender and cred to inspire a generation. Even today, they still seem current -timeless, the lyrics just as prolific as they were fifty years ago. People flock from all over the world on a musical pilgrimage to see where they made history. You will be placed right in the cover shot at the famous Abbey Road Studios crossing; die-hard Beatles Fans always take their shoes off! What better way to see these iconic sights, thanfrom the very same perspective as the Fab Four. Paul, George, John and Ringo all drove Minis! You can now travel just as they did and see where they filmed A Hard Day’s Night, where they set up their first office, where Paul married Linda and where they played their last ever gig –on the roof of Apple Studios on Saville Row. Obviously you will be rocking out to a Beatles sound track throughout too!

Other Practical InformationAll tours to be booked at least 48 hours in advance Subject to availability Maximum 3 passengers per car, if your party is more than 3 you will travel in multiple cars (24personsmaximum) Not wheelchair accessible if 3 passengers per car, wheel chair accessible only when 2 passengers per car
NEED HELP OR HAVE A QUESTION ABOUT THIS TOUR?
If you have any question about this tour or need help with planning a trip, please do not hesitate to get in touch with us. We're ready to help.
Get help
hours 02 From US$ 296 Flat Rate
CHECK AVAILABILITY
Response Time: 2 hours Response Rate: 100% MAKE AN ENQUIRY