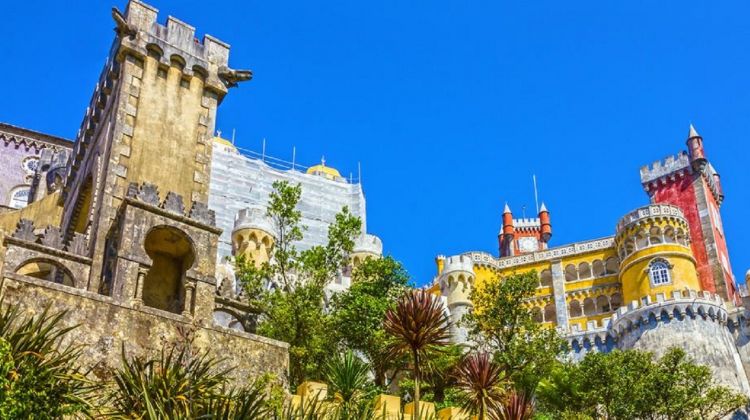 Tour with Flexible Booking Policy
HIGHLIGHTS
Join us for this full-day sightseeing tour from Lisbon exploring Sintra and Cascais.

The first stop is at the National Palace of Queluz. Initially a rest stop for the nobility, it later became the official residence of Prince John VI. It’s beautiful gardens and rococo architecture dazzle visitors with its sumptuousness.

Continue on to the center of Sintra, where you can visit the castle or the National Palace. Walk through the colorful streets of the village, contrasting with the bright green of the mountain. The morning will not end before a stop at the Quinta de Monserrate and Quinta da Regaleira, a fruit mansion imagined by a man in love with the arts.

After a lunch break, the afternoon begins with a visit to the most famous and magical palace on this tour, the Pena Palace. Built 500 meters above sea level, it is considered one of the most beautiful palaces in Europe and in the world. Its colorful architectural extravagance with its neo-Moorish elements gives off an exotic character that is accentuated by the lush vegetation of Pena Park.

The return to Lisbon passes through the picturesque village of Cascais, where you have free time to sit by the sea, sip a beer with a seafood dish or eat one of the best ice creams in the world. Back on the road, pass the Estoril coast with its vast and beautiful beaches. In Lisbon, you are returned to your hotel, with the certainty of having spent a memorable day in dreamy locations.
View More
WHAT'S INCLUDED WHAT'S EXCLUDED
Why Book with Bookmundi
What are customers saying about Bookmundi
Excellent
4.69 Average 340 Reviews

NEED HELP OR HAVE A QUESTION ABOUT THIS TOUR?
If you have any question about this tour or need help with planning a trip, please do not hesitate to get in touch with us. We're ready to help.
Get help
hours 08 From US$ 78 See Group Discount
CHECK AVAILABILITY
Response Time: 1 hour Response Rate: 100% MAKE AN ENQUIRY