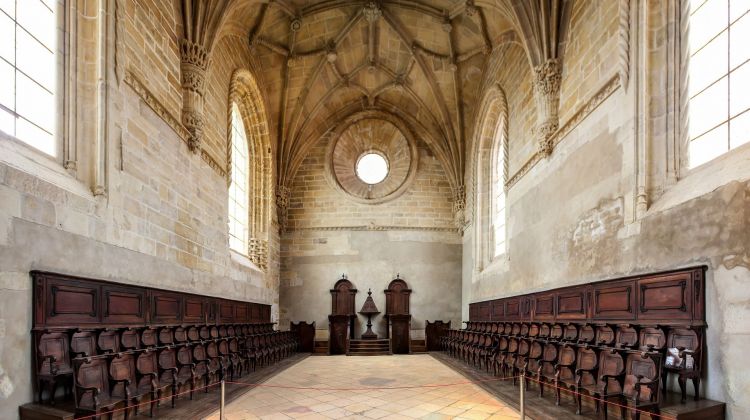 HIGHLIGHTS
Travel back in time to the days of the Knights Templar with this 8-hour, guided tour. Join us as we visit some of the most important monuments associated with one of the most intriguing and enigmatic military orders the world has ever seen. The order of the Knights Templar was founded at the beginning of the 12th century for the protection of the Holy Sepulchre and of Christian pilgrims on their way to the Holy land.

We will pick you up at your hotel or accommodation in Lisbon and drive you to the Convent of Christ, originally a Templar stronghold that later became a Roman Catholic convent after this military order ceased to exist in the 14th century. Explore the convent and learn more about the history of the Templars.

Also see the magnificent castle of Almourol, a medieval castle atop an islet in the middle of the River Tagus. This castle was part of the defensive line of the Templars and acted as their stronghold during the Portuguese Reconquista.

Get the chance to enjoy queijinhos do ceu, a traditional Portuguese sweet, along the way. We will drop you off at your hotel or accommodation after the trip is over.
View More
WHAT'S INCLUDED WHAT'S EXCLUDED
Why Book with Bookmundi
What are customers saying about Bookmundi
Excellent
4.71 Average 312 Reviews

Other Practical InformationDuring the winter months, inclement weather may cause the disruption of the boat trip to Almourol castle.
NEED HELP OR HAVE A QUESTION ABOUT THIS TOUR?
If you have any question about this tour or need help with planning a trip, please do not hesitate to get in touch with us. We're ready to help.
Get help
Black Friday SUPER SALES UNLOCK DEALS
hours 08 From US$ 141
Unlock US$ 7 in extra savings CHECK AVAILABILITY
Response Time: 3 hours Response Rate: 100% MAKE AN ENQUIRY