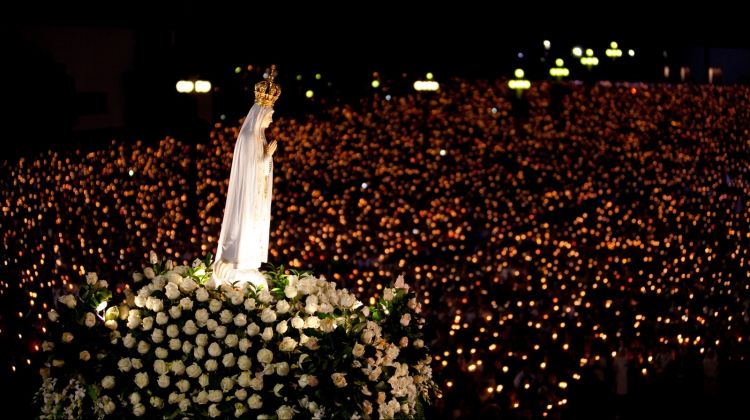 HIGHLIGHTS
Private day tour to Fátima from Lisbon. The most complete tour to Fátima, for the ones that are interested in great architecture, amazing sightseeing and history from the medieval and royal times.

Discover the sacred sites of Fátima, one of the world’s most prominent pilgrimage sites, on a comprehensive full-day tour from Lisbon. Listen to anecdotes surrounding the Miracle of the Apparition of Our Lady of Fátima and enjoy some relaxed free time to visit shrines and holy sites independently. Absorb the tranquil ambience of the monasteries at Batalha and Alcobaça, admire the charming fishing village of Nazaré and sample traditional Portuguese liquor in the medieval village of Óbidos.

The itinerary for this tour is as follows:

**Fátima**
Visit to Fátima- one of the most important centers of pilgrimage in the world and where the Miracle of the Apparition of Our Lady of Fátima happened. You will have free time to visit the shrines.

The Chapel of Apparitions marks the place where the Virgin Mary appeared in 1917 to the 3 little shepherds to convey to them a message of peace.. The children were told by the Blessed Virgin Mary that she would perform a miracle so that the people would believe them and on the 13th October, a crowd of more than 70,000 people came to see the “Miracle of the Sun”, signifying God’s presence amongst the people. Fatima is one of the most important Catholic Shrines in the World. Still here, we will go through the religious articles factory where you can purchase your rosary and other religious articles to be blessed in the sanctuary.

**Batalha**
Visit Mosteiro de Batalha, considered as one of the Seven Wonders of Portugal.

This small town was the scene of great Portuguese historical moments of great importance for our country and the biggest remainder that we have from that time is the Batalha Monastery, that is considered World Heritage by UNESCO and elected as one of the Seven Wonders of Portugal. It is the largest Portuguese Gothic monument and is also the place where the Manueline style was born.

**Alcobaça**
Visit Mosteiro de Alcobaça, considered World Heritage by UNESCO founded in 1178 by the Cistercian Order that had a lot of influence in the creation of the kingdom of Portugal.

This beautiful site is also where remains buried the most tragic love story of Portugal: King Pedro I and his beloved Inês de Castro, who was murdered by order of Pedro's father.

The best place to go here is on the top of the cliff that is called - Sítio da Nazaré, where is the first place in Portugal where Our Lady was worshiped.

**Óbidos**
Last but not least is Óbidos, an enchanting medieval village of Óbidos where you will taste the original “Ginjinha” liquor.

This village that belonged to the Queens of Portugal, still lives surrounded by the walls of its castle. They can be crossed by the upper banks and from there you can observe the landscapes around the village and you can also stroll along its characteristic streets.

We look forward to showing you exciting parts of our Portugal.
View More
CUSTOMER REVIEWS ABOUT GENUINE TOURS PORTUGAL
4 - Very Good
Based on 13 reviews
Jennifer's review for another Genuine Tours Portugal tour
5 - Excellent
“Ricardo was amazing...we only had one day in Lisbon due to travel issues and he picked us up at 6am, took us to Fatima and then through Lisbon for the day. He was the perfect balance of historical expert, story teller and he clearly loves his country. We would definitely use this company again when we come back to this beautiful country.”
Maria's review for another Genuine Tours Portugal tour
4 - Very Good
“You would think that so many sites in one day is not possible, but it is possible in this more than full day trip. Our guide/driver (Joao/John) would give some background information in the car before arrival at a site and explain the main things to see once there. After that there was enough time to walk around on your own, take pictures etc. He was always willing to answer questions and is a good driver. The sites are very impressive, each in their own way. After all the churches, chapels and monasteries, the medieval town of Óbidos is a very nice final stop. We were only 4 people on the tour, so almost private. Very good deal for the price.”
Review for another Genuine Tours Portugal tour
4 - Very Good
“Guide warm welcoming and attentive. Could have been more informative of sights. Great sights to see would recommend. Gives a good insight of Lisbon surrounds. Suggest if 4 in car should not use the vehicle provided as rear sest only suitable for 2 . Very uncomfortable for three prople”
Read more Genuine Tours Portugal reviews
WHAT'S INCLUDED WHAT'S EXCLUDED
Why Book with Bookmundi
What are customers saying about Bookmundi
Excellent
4.72 Average 298 Reviews

Other Practical InformationWe will pick you up at your accommodation in Lisbon between 9h and 9h45 am. Once you book we will contact you with exact time. Please provide us your pick-up address.
NEED HELP OR HAVE A QUESTION ABOUT THIS TOUR?
If you have any question about this tour or need help with planning a trip, please do not hesitate to get in touch with us. We're ready to help.
Ask a question
hours 10 From US$ 111 See Group Discount
CHECK AVAILABILITY
Response Time: 2 hours Response Rate: 100% MAKE AN ENQUIRY