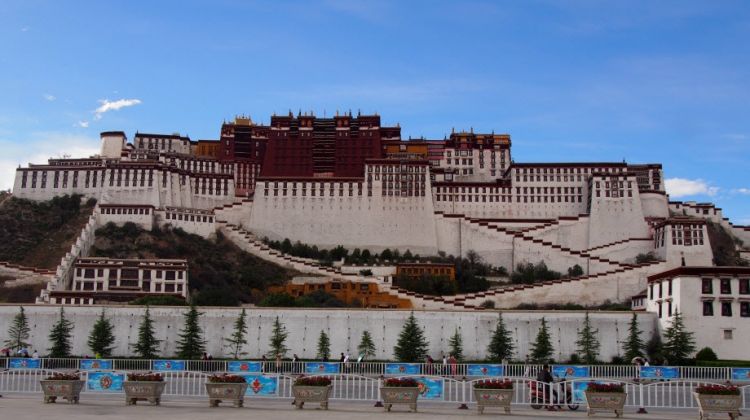 HIGHLIGHTS
Tibet is considered a land of mystery, even in modern day. A land of monks, monasteries and meditation, Tibet is a spiritual destination quite unlike any other. Explore the many medieval monasteries and palaces built in stark contrast to the humbling landscape of the Tibetan plateau.

On this small group tour, explore Lhasa with a local English-speaking guide as you make your way across the major Tibetan landmarks such as Potala Palace, Johkang Monastery, Barkor Kora, Drepung Monastery and Sera Monastery.

Before starting the tour, your Tibet travel permit will be prepared in advance for you to travel to Lhasa from a large city in China such as Beijing, Shanghai, Xian, Chengdu and Guangzhou, among others. Upon your arrival in Lhasa, your guide will pick you up at the airport or the train station and transfer you to your 3-4 star hotel accommodation.

my sincere apologies for disappearing on you, its been busy month.

I wanted to thank you on behalf of me and my mom for a wonderful and unforgettable trip you organized for us. We are left with the memories that will stay with us for many years!

Many many thanks again and again!”
ITINERARY Expand All
WHAT'S INCLUDED WHAT'S EXCLUDED
Why Book with Bookmundi
What are customers saying about Bookmundi
Excellent
4.71 Average 312 Reviews

Other Practical InformationTaking photos is forbidden in the monasteries. If you want to take photos of Tibetan pilgrims, gently ask for permission. Swimming and fishing are not allowed in Tibet's holy lakes. Do not talk about sensitive topics like politics. International tourists are not allowed to travel alone in Tibet according to the policy. Walk clockwise around Barkhor Street. Never venture into the unknown trails. If you are uncertain about something, it’s advisable to ask your guide before you doing it.
NEED HELP OR HAVE A QUESTION ABOUT THIS TOUR?
If you have any question about this tour or need help with planning a trip, please do not hesitate to get in touch with us. We're ready to help.
Get help
days 04 From US$ 0
Sorry, this product is currently not available.
Response Time: 1 hour Response Rate: 100% MAKE AN ENQUIRY