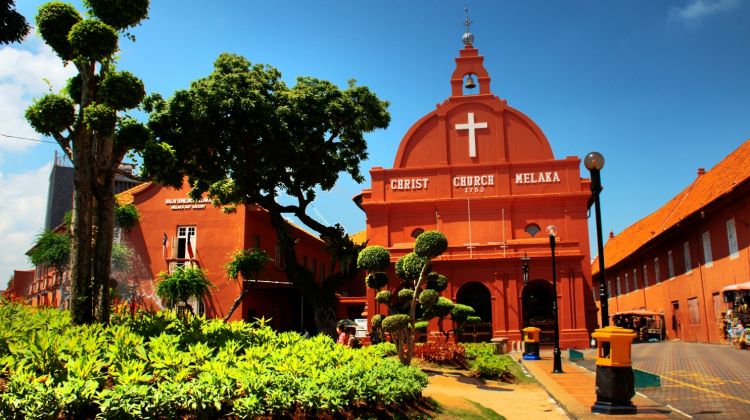 HIGHLIGHTS
The city and state of Malacca is considered the polar opposite of the effervescent city of Kuala Lumpur. Touted as the Historical State of Malaysia, Malacca is the site of the earliest Malaysian sultanates and an important chapter in the history of Malaysia with its strong Dutch, British and Portuguese influence. Named as a World Heritage Site in 2008, the popularity of this charming destination has tremendously increased ever since.

Reach Malacca after an hour and a half’s drive from KL City Centre. You’ll be picked with from your hotel, within 5 km radius of the Twin Towers. At Malacca, get the chance to admire the surviving gate of the Portuguese fortress, A Famosa, one of the oldest European structures built in Southeast Asia, dating back to 1511.

Head to the Dutch Square where the majestic salmon red town hall is located. The Stadhuys hall used to serve as the Dutch governor’s residence. Today, it hosts a museum showcasing a wide variety of Malaccan artefacts.

Our guided walk through the historic center of Melacca allows visitors to learn first-hand about the Portuguese and Dutch influences in the region’s architecture. Stop for an authentic Malaccan-style lunch made with fresh ingredients.

Visit major tourist attractions such as the Cheng Hoon Teng Taoist temple, the oldest functioning temple in Malaysia, and the quirky Jonker Street, known mostly for its antiques and unique shops. Later, enjoy a memorable drive through the picturesque Malaysian countryside and stop for a visit to an old Malaysian fishing village, locally known as “kampong”.

With our expert local guides providing essential details, this extremely popular and highly affordable tour will prove to be a fantastic educational opportunity as well.

View More
CUSTOMER REVIEWS
5 - Excellent
Based on 1 review
A
5 - Excellent
Great tour, very relaxing
“It's a good place to release the stress especially if you go with your friends. It's a recommended place for making competition among your friends. However, the weather was extremely hot and food was expensive.”
WHAT'S INCLUDED WHAT'S EXCLUDED
Why Book with Bookmundi
What are customers saying about Bookmundi
Average Reviews

Other Practical InformationHotel pickup and dropoff from hotels and residence situated within 3 km radius from the Twin Towers Pick up and dropoff from hotels on the outskirts will be chargeable according to the distance, and you may pay the additional charge directly to the driver Confirmation of your booking will be sent by email after you make your online payment. Kindly provide your contact number with your country code when you key in your contact details as you will be contacted via What's App with updates from time to time
NEED HELP OR HAVE A QUESTION ABOUT THIS TOUR?
If you have any question about this tour or need help with planning a trip, please do not hesitate to get in touch with us. We're ready to help.
Get help
hours 08 From US$ 60 See Group Discount
CHECK AVAILABILITY
Response Time: 1 hour Response Rate: 100% MAKE AN ENQUIRY