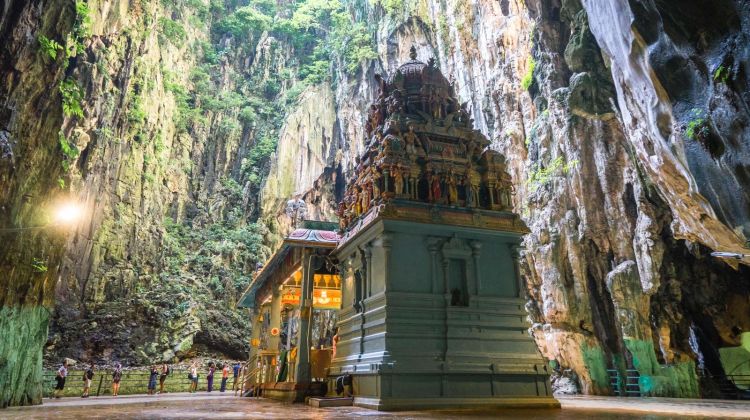 HIGHLIGHTS
Dating back to more than 400 million years, the Batu Caves is a limestone hill containing series of caves with Hindu deity shrines. This guided day tour takes you through the many temples, including the century old Main Temple.

The 272 steps leading to the entrance to the cave system is guarded by a colossal 140 feet-tall statue of the Hindu deity Muragan. From the top of the steps, you’ll get a magnificent view of Kuala Lumpur. The caves are a Malaysian national treasure. On this three-and-a-half-hour tour, you’ll also visit the world-renowned Royal Selangor Pewter factory and watch batik craftsmen create a traditional batik painting.
View More
CUSTOMER REVIEWS ABOUT KUALA LUMPUR TOURS
5 - Excellent
Based on 10 reviews
B
5 - Excellent
Budi's review for another Kuala Lumpur Tours tour
“The tour guide was very informative. just have some feedback; it would be much more better if the tour provide us the destination information brochures and mineral water (or snacks) in the car.”
K
5 - Excellent
Kathy's review for another Kuala Lumpur Tours tour
“2. Great way to get around with someone who lives there. Go to place you would not of gone to yourself at a great price.”
M
5 - Excellent
Mohameed's review for another Kuala Lumpur Tours tour
“We had a full day tour today with our guide Chandra. We saw so many sights and Chandra was very knowledgeable, he also did the tour at our pace and was helpful friendly and flexible”
Read more Kuala Lumpur Tours reviews
WHAT'S INCLUDED WHAT'S EXCLUDED
Why Book with Bookmundi
What are customers saying about Bookmundi
Average Reviews

Other Practical InformationNo skirt or short pants are allowed inside the temple premises. Kindly wear suitable clothing. Confirmation of your booking will be sent by email after you make your online payment Hotel pickup and dropoff from hotels and residence situated within 3 km radius from the Twin Towers. Pick up and dropoff from hotels on the outskirts will be chargeable according to the distance, and you may pay the additional charge directly to the driver. Kindly ensure your contact number filled with country code. We contact you via What's App and update you driver details one day before the tour.
NEED HELP OR HAVE A QUESTION ABOUT THIS TOUR?
If you have any question about this tour or need help with planning a trip, please do not hesitate to get in touch with us. We're ready to help.
Get help
hours 3.5 From US$ 18 See Group Discount
CHECK AVAILABILITY
Response Time: 2 hours Response Rate: 100% MAKE AN ENQUIRY