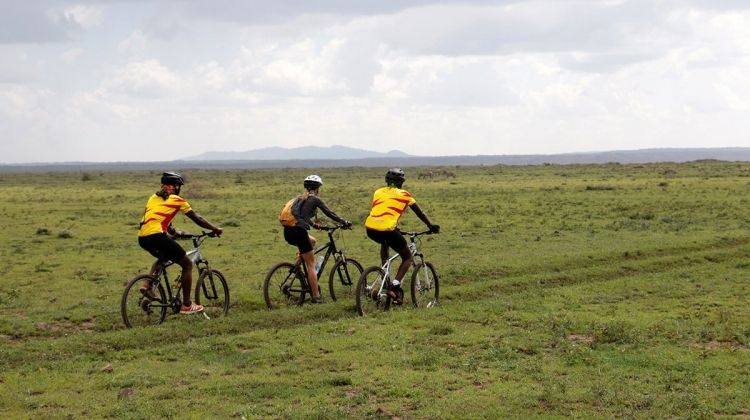 Begin by cycling in the shadow of mighty Mount Kilimanjaro, end your journey basking in the breeze on the edge of the Indian Ocean. And in between? There's the vast and untamed Tanzanian savanna, where you'll encounter extraordinary cast of characters, both human and animal, that make this trip unforgettable.

Cycle from the slopes of Kili, across the northeastern savanna for an introduction to Tanzania's world-renown wildlife and inhabitants. Meet and mingle with members of the Masaai tribe in a real Masaai village, staying the night and dancing by firelight. Then, safari in Mkomazi National Park, spotting the Big 5, and some of the last African Black Rhinos in the world.

But there's even more to this impossibly huge land. Explore further, into lush, green forests with hidden waterfalls and coffee plantations. Roast and grind your own, then savor the freshest cup of single origin you've ever tasted. For a dramatic change of scenery, head to the sun-saturated coast, and the country's only national park that meets the sea. Safari again, this time by bike- with a support vehicle close behind! And make a new friend, or several, with the easy-going and friendly locals of Tanzania's authentic fishing villages.

A local guide and support van will guide you on this fascinating exploration of Tanzanian cultures and natural wonders, and relax in comfort at the end of the day in safari lodges and charming boutique hotels.

No additional cancellation fees apply for this Cycling Kilimanjaro to the Indian Ocean tour. You can cancel the tour up to 45 days prior departure and avoid paying the full amount, but your deposit paid is non-refundable. No refund applies for cancellations within 44 days of departure.

For this Cycling Kilimanjaro to the Indian Ocean tour getting the required visa(s) is the responsibility for each individual traveller, as visa requirements vary depending on your nationality. We recommend to check with your local embassies representing the countries that you are travelling to, as part of this itinerary.

Minimum Participants The minimum number of Participant for this trip is 2
NEED HELP OR HAVE A QUESTION ABOUT THIS TOUR?
If you have any question about this tour or need help with planning a trip, please do not hesitate to get in touch with us. We're ready to help.
Get help
days 09 SavingUS$ 160
You have unlocked exclusive savings:
5% OFF TODAY From US$ 3,200 US$ 3,040
Sorry, this product is currently not available.
Response Time: 3 hours Response Rate: 100% MAKE AN ENQUIRY

Tour is operated by : SpiceRoads
1 Reviews
Currently 05:38 in Bangkok MAKE AN ENQUIRY Response Time: 3 hours Response Rate: 100%
Download Trip Notes Enter your email to get a PDF file containing all the trip information for the Cycling Kilimanjaro to the Indian Ocean tour.
Trip Notes Sent
We have sent the trip notes for this tour to:

If you book the Cycling Kilimanjaro to the Indian Ocean tour within the next 5 days, you can get by applying the following code: