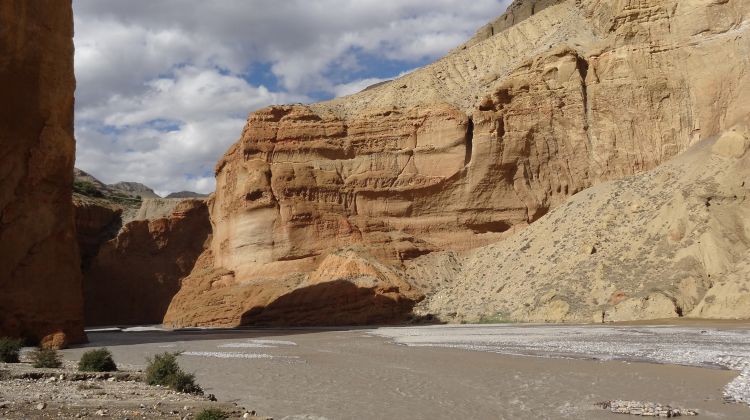 HIGHLIGHTS
Upper Mustang Trekking offers a great opportunity to get insights into Trans Himalayan region of Annapurna which is quite similar to Tibetan trans-Himalayan topography. The colorful rock formations with numerous cave dwellings high up the cliffs, impressive chortens and ancient monasteries reflect the culture and traditions of Buddhism. Along with topographical similarities, the local people still follow the centuries old life style and traditions. You get an amazing feeling of isolation while trekking around the deserted lands which also enchants and inspires visitors to this region.

Major attraction and actually an opportunity during our Upper Mustang trek is the walled city of Lo-Manthang palaces. Upper Mustang is known as forbidden kingdom and still sees very few tourists each year. Trek along the land of canyons of the Kali Gandaki River, across the rugged land where people have saved their centuries old culture in Buddhist chortens, small stupas, atop hills, on pathways leading into villages and even inside caves. Tibetan Buddhism and the myths are intertwined threads that are in turn woven into the landscape.

Finally as you reach Lo Manthang, we will also arrange your meeting to King of Mustang, Jigme Parbal Bista in the walled capital Lo Manthang. Yes, Nepal is republic but Mustang even today has a king! The Mustangi locals have their own head of the tribe whom they respect, he is known as Mustangi King. Visit the three red-walled monasteries at the heart of the town; watch the astonishing way of life and family life around the nomadic villages.

The best time to trek around Upper Mustang Trek is from the month of March to November. This trek can be joined even during the monsoon season as Upper Mustang lies in rain-shadow area and receives negligible amount of rainfall. So, except in winter due to extreme cold, this trek to the hidden kingdom is recommended during anytime of the year.

Please refer to the itinerary for day-by-day activities.

QUESTIONS AND ANSWERS Find answers to the most frequently asked questions about this tour.
Read more questions and answers
NEED HELP OR HAVE A QUESTION ABOUT THIS TOUR?
If you have any question about this tour or need help with planning a trip, please do not hesitate to get in touch with us. We're ready to help.
Get help
days 14 SavingUS$ 199
You have unlocked exclusive savings:
10% OFF TODAY From US$ 1,990 US$ 1,791
CHECK AVAILABILITY
Response Time: 2 hours Response Rate: 100% MAKE AN ENQUIRY