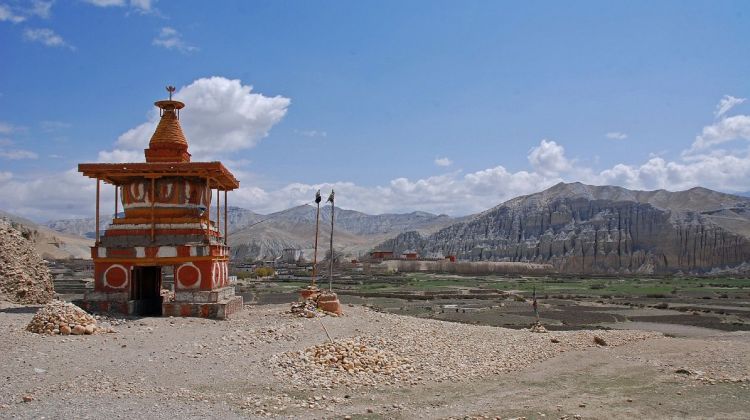 HIGHLIGHTS
The Upper Mustang trek leads you into the hidden kingdom of Mustang, also called Lo. The ultimate destination of this trek is Lo-Manthang, the capital of Upper Mustang. This medieval town is surrounded by a huge wall, and it not only offers its visitors beautiful views of the rugged landscape but also allows them to observe the Tibetan Buddhist culture that has been practiced in this region since many centuries ago.

In and around Lo-Manthang, hikers can discover ancient monasteries, Mani walls, Buddhist shrines, Gompas and Mandalas. Lo used to be a part of the Tibetan empire and you will see houses built in the Tibetan style with white washed walls.

Mustang is an arid, treeless land of monasteries. The best season is March to October, although Upper Mustang is in the rain shadow region of Nepal, meaning trekkers can also visit during the monsoon season. Several years ago, trekking used to be organized as camping or tenting treks. Now, the area is developing simple tea houses.

View More
CUSTOMER REVIEWS ABOUT GLORIOUS HIMALAYA TREKKING PVT LTD.
5 - Excellent
Based on 32 reviews
Jose's review for another Glorious Himalaya Trekking Pvt Ltd. tour
5 - Excellent
“Glorious not just made my trip affordable, but also my dream to experience the Himalayas come true. I'd like to thank everyone who has helped me in making this trip possible.
Bishal our guide was excellent, and the porter were phenomenal, without whom my trip could not have been easier.
In General, Ganesh and his team was very experienced, professional and did excellent with their job. Don't hesitate to book this trip, and choose Glorious Himalaya.”
Arnelle's review for another Glorious Himalaya Trekking Pvt Ltd. tour
5 - Excellent
“Wonderfully Organized Ganesh and His Team!!!
Everything was very professional and perfectly planned.
It felt like more of a journey than a trip.
Our Local Guide Dakman knew much more than the rest of the guides and explained to us everything that we saw while on the trek. It was interesting that he knew every hotel and lodge owners. We couldn't have completed this trip without his knowledge, experience, and guidance was perfect. He was continually asking after our health and comfort for the 12 days. With the fantastic guidance and care of Dakman, our amazing group of 9 reached EBC with only minimal effects from the altitude.
In Generall, I considered our Guide, Porters and Company was very professional and well experienced, responsible and caring all the way.
Thank you to Glorious, Dakman and all the Porters for a remarkable trip!”
Suzan's review for another Glorious Himalaya Trekking Pvt Ltd. tour
5 - Excellent
“We, five travel mate, planned to visit ABC in the middle of Mar 2019 and selected Glorious Himalaya Trekking among the choice list of eight agencies due to reliable communication, flexible itinerary and reasonable price quotation.
Unfortunately ABC route has been closed due to avalanche just before the two days of our journey. Agency owner Mr. Ganesh promptly informs us and suggested some alternatives with pros and cons. We just relied on him to do on behalf of us and requested to take the chance till last point. He redesigned accordingly and suggested optimum solution which also capable to reroute to ABC if we become fortunate again. We went till Chomrong via Poonhill-Ghorepani and observed the similar situation stated by him earlier.
The most entertaining thing was selection of accommodations which was excellent choice in terms of scenic position & comfort ability to roam around in leisure time though sometimes we have to slightly compromise the lodging facilities. The guide & porters were with us like presidential guards to facilitate till whenever we went to sleep. Their positive attitude always inspired us to overcome all challenging situation during trekking.
On the whole, Glorious Himalaya Trekking ltd. managed the entire tour so entertaining, comfortable and undoubting that I will like to select them for my next trekking. In a single sentence, Glorious Himalaya Trekking ltd. knows to provide positive customer experience with professionalism”
Read more Glorious Himalaya Trekking Pvt Ltd. reviews
ITINERARY
Alt. in: ALTITUDE MAP
Expand All
WHAT'S INCLUDED OPTIONAL ADDONS (Available during check-out) WHAT'S EXCLUDED
Why Book with Bookmundi
What are customers saying about Bookmundi
Excellent
4.71 Average 321 Reviews

QUESTIONS AND ANSWERS Find answers to the most frequently asked questions about this tour.
Read more questions and answers
NEED HELP OR HAVE A QUESTION ABOUT THIS TOUR?
If you have any question about this tour or need help with planning a trip, please do not hesitate to get in touch with us. We're ready to help.
Get help
days 18 From US$ 1,800 See Group Discount
CHECK AVAILABILITY
Response Time: 3 hours Response Rate: 100% MAKE AN ENQUIRY