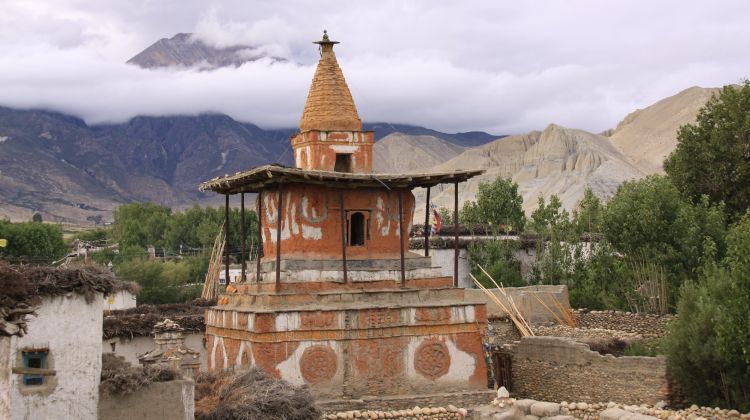 HIGHLIGHTS
Above the Annapurna mountain range of the mighty Himalayas is the land of Mustang. A forbidden land for centuries, Mustang is an ancient kingdom with its own king that lies north of the monsoon rains in Nepal. It’s ancient capital city, Lo Manthang, is Nepal’s only walled city, filled with ancient wonders that few people have ever seen.

The Mustang Valley region lies at the head of the sacred waters of the Kali Gandaki River. Home to both Tibetan Buddhism and the ancient Bön religions, there are ancient caves filled with amazing religious artwork from centuries past. The landscape is often compared to a moonscape because of the lack of rain.

We invite you to journey to this ancient forbidden kingdom. This region was long closed to the outside world, and has only been opened up for a few adventurers to explore each year. Special permits are required to enter this amazing place, and we are one of those privileged Nepal trekking companies that can not only get you a permit, but also provide you with a knowledgeable guide who can show you the wonders of the Mustang Valley region.

This trek passes through narrow clefts in the rocks and also climbs to amazing alpine vistas. These are the beginnings of the high Tibetan plateau with the snowcapped peaks to the south.

Other Practical InformationOur trip packages includes complete requirement for your holidays: Our trip starts from your arrival at Kathmandu till departure from Kathmandu. It is fully organized that includes accommodation in Kathmandu and trekking, all meals in trekking, all necessary logistic support, guide and porters, trekking permits and entrance fee, etc. There is not any hidden charge. You spend 2 nights in Kathmandu before trekking and another 2 nights after trekking: 2 nights stay in Kathmandu before trekking gives enough time to recover from jetlag, rest to restore energy for trekking and last-minutes preparation of trekking. 2 nights stay in Kathmandu after trekking is considered as reserve days, in case you could not follow itinerary due to any reason need extras days to reach your destination and delay your return from trekking. The trip itinerary is crafted by expertise. It includes plenty of time to insure your leisure and taking you to destination. It is very much flexible where it is necessary. A TYPICAL TREKKING DAY A typical day revolves around the Nepal sunrise and sunset, rather than any Western time schedule. The day starts with an early wakeup call. You then pack up your gear and enjoy a rousing breakfast before starting your morning’s walk. The sirdar will already be organized and have assigned loads to porters and your group will then set off on the trail at a leisurely pace, enjoying the view and stopping to take photographs. After 2-3 hours walk you stop for lunch. This lasts for about 90 minutes which gives you time to relax, or explore the local village. The afternoon’s walk is usually shorter and we arrive at the campsite or tea-house in plenty of time to relax and savor the surroundings. Later in the evening dinner is served, giving you an opportunity to sample the delicious food, talk over the day’s events, and look forward to another special day on the trails of Nepal. HEALTH ISSUES We recommend that all clients consult their doctor to discuss the health issues associated with their trek. We also recommend that clients bring their own personal first aid kit to supplement the comprehensive first aid kit carried by the Trek Leader. VACCINATIONS REQUIRED Please ensure that you allow at least 1 month to complete a course of vaccinations. Whilst your personal doctor will be the final authority, we recommend the following : • Poliomyelitis • Typhoid • Tetanus • Rabies • Meningococcal • Immunoglobulin (for Hepatitis A) MALARIA Nepal is listed as a country for which malaria prophylaxis is advised. We will not be visiting any malarial areas on the treks, however you may wish to consult your doctor about the need to take malaria pills. Trekkers who plan to do rafting and jungle excursions are advised to take the necessary medication to protect against malaria. ALTITUDE SICKNESS Many treks in Nepal can take you quite rapidly to high altitudes, so you need to give your body time to acclimatize. If you ascend faster than your body can acclimatize you will start to develop symptoms of Acute Mountain Sickness (AMS). A headache being the most common symptom, others are nausea, vomiting, fatigue, loss of appetite, dizziness and sleep disturbances. The best way to acclimatize is to ascend slowly and gradually. The common wisdom is that you should take 2-3 days to reach 3000m – If flying in to above this height remember to take extra acclimatization days (for example flying into Lukla). Once above 3000m, you should sleep no more than around 300m above your last nights altitude, and take a rest day every 3 days (or 1000m). At times it can be difficult to stick exactly to this schedule, as villages aren't always conveniently placed for acclimatizing, so you should think of the 300m as an average. During the day it is okay to trek higher as long as you descend to sleep. Remember the mountaineer’s saying "Climb High, Sleep Low". If at any time you get symptoms of AMS you should not climb higher until they are gone. If they persist then you should descend to below the height where they first started. Only start to climb again when they have gone. All of our itineraries allow for a proper acclimatisation schedule, and of course on our private departures you have the freedom to go slower if you are finding it tough - everyone acclimatises at a different rate. Please also consider your guide and porters and watch for signs of AMS in them. They are not immune to AMS. You will find a graph below detailing the acclimatisation schedule. It shows the ideal acclimatisation schedule against suggested itinerary. We always aim to get as close to the ideal as possible taking account of such things as available accommodation and camping spots with water etc. INSURANCE We INSIST that an appropriate insurance policy is taken out which covers travel in isolated and mountainous areas, and which also includes helicopter rescue. We recommend that you consult a reputable insurance agent or insurance specialist. RECOMMENDED EQUIPMENT Footwear: Trekking Boots, thick socks, light socks, camp shoes. Clothing: Down or fibre Jacket, filled waterproof jacket and trousers, sweater or fleece jacket, warm cotton trousers, shirts and T-shirts, shorts, long underwear, wool hat, sun hat, gloves, bathing suit, track suit. Other Equipment: Sleeping bag (4 seasons), down jacket, day pack, water bottle, sun cream, sunglasses, flashlight with spare bulbs and batteries, lip salve, gaiters. Optional: Insect repellent, toilet articles, note book & pen, toilet roll, laundry soap, pocket knife, towel, sewing kit, plasters, binoculars, camera, film, cards and personal medical kit.
QUESTIONS AND ANSWERS Find answers to the most frequently asked questions about this tour.
Read more questions and answers
NEED HELP OR HAVE A QUESTION ABOUT THIS TOUR?
If you have any question about this tour or need help with planning a trip, please do not hesitate to get in touch with us. We're ready to help.
Get help
days 18 From US$ 1,850 See Group Discount
CHECK AVAILABILITY
Response Time: 1 hour Response Rate: 100% MAKE AN ENQUIRY