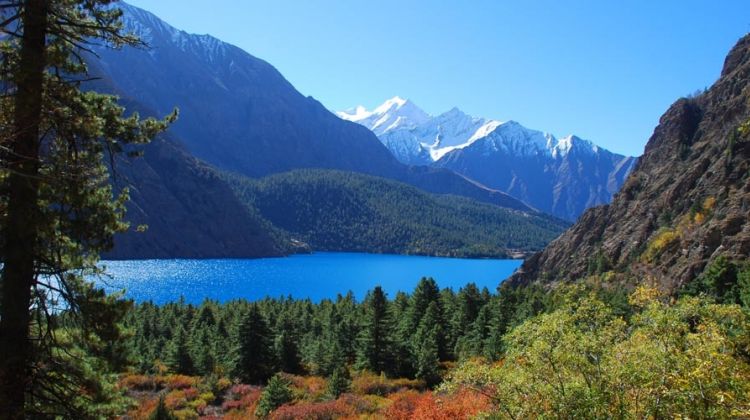 HIGHLIGHTS
Dolpo region is the most remote and least developed district in western Nepal, a truly isolated but artistic and spiritual corner of Nepal. Although some anthropologists and geographers had explored the region, the southern part of Dolpo was only opened for organized trekking groups with special permits. Peter Mathiesen's book - The Snow Leopard has contributed to the mystique and attraction of Dolpo. The Dolpo region provides Eco-adventurous routes including a wild and wonderful variety of flora and fauna: including Blue sheep, Mountain Goat, Jackal, Wolf and the legendary Snow Leopard. The east and south is bordered by Mt. Dhaulagiri (8,167m) and the Chure Himal range and the West by the Jumla district. Dolpo is a unique Village inhabited by Bon and Buddhist settlers. The area displays tranquil and heart touching nature, off-the beaten trekking trials, different kinds of Nepalese art and spiritual activities.

Geographically Upper Dolpo is a southern extension of Tibet, but located in the state of Nepal. Since 1984 it has been the country’s largest national park and conservation area. The park sustains an abundance of wild life and monasteries, including the 800 years old Shey Gumba (Buddhist monastery), and the legendary elusive Snow Leopard, as well as being home to a fascinating race of Tibetan speaking Nepali people and their indigenous tradition and culture. You will be spending nights at isolated villages and be brought very close to the lifestyle of the local people and their culture.

Dolpo is one of the most beautiful and remote treks in Nepal, very rarely visited by trekkers. Shey Phoksundo National Park (3555 sq km) of mid-western Nepal is the focal point of Upper Dolpo.

During the Upper Dolpo trial we trek Five passes, over 16,500 feet, encountering interesting places, people, villages, valleys and serene forest of pines, oaks and rhododendron. When crossing the 5 passes many mountain peaks can be seen including Nepal’s deepest lake “Phoksundo Lake”.

QUESTIONS AND ANSWERS Find answers to the most frequently asked questions about this tour.
Read more questions and answers
NEED HELP OR HAVE A QUESTION ABOUT THIS TOUR?
If you have any question about this tour or need help with planning a trip, please do not hesitate to get in touch with us. We're ready to help.
Get help
days 21 From US$ 3,800 See Group Discount
CHECK AVAILABILITY
Response Time: 2 hours Response Rate: 100% MAKE AN ENQUIRY