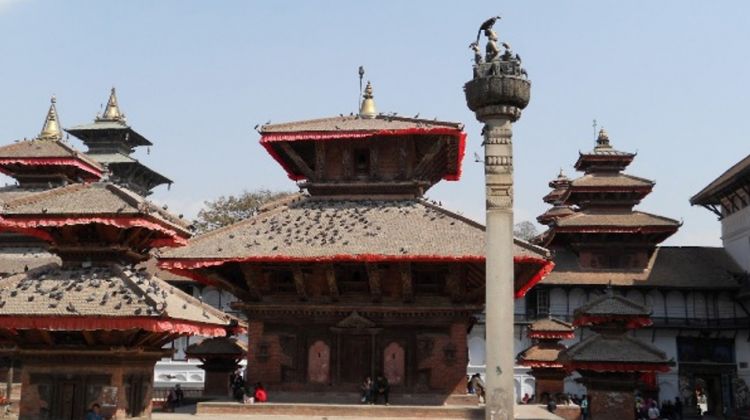 HIGHLIGHTS
A day tour of Kathmandu covers the important monuments of Kathmandu Valley within one day. After having breakfast in a hotel we visit the famous temples of Kathmandu like Swayambhunath Stupa (Monkey Temple), Pashupatinath Temple, Patan Durbar Square, and Bhaktapur Durbar Square, Kathmandu's largest and most impressive Durbar square.

Below please find some brief insights about some of the monuments and squares that we will visit:

Patan Durbar Square
Patan is a small city that touches Kathmandu and Bhaktapur. The mostly visited place of Patan is Patan Durbar square which constitutes numerous temples within a small area. The entire east side of the Durbar square is dominated by the ancient royal palace that were used to be ruled by the Malla Dynesty. Patan is also known as the city of fine arts which consists of remarkable monuments like Krishna Temple, Banglamukhi Temple, Patan Museum and many others.

Kathmandu Durbar Square:
Kathmandu Durbar Square is the natural place to begin our sightseeing. The old royal palace, running along the eastern edge of the square, takes up more space than all the other monuments here combined. Kumari Chock, home of Katmandu's "Living goddess", overlooks the square from the south. The square itself is squeezed by the palace into two parts: the Southern part with Kasthamandap, the ancient building that probably gave Kathmandu its name, and the Northern part, taken up by various processions of statues and temples. The building here is the greatest achievement of the Malla dynasty, resulting from the great rivalry between the three palaces of Kathmandu, Patan, and Bhaktapur.

Kathmandu Valley was once divided among the children of Yaksya Malla. For visitors today, and for the Nepalese, it was serendipitous that they, and later their off springs, began an artistic warfare trying to outdo each other in splendid contributions. Kings copied everything their neighbors built in an even grander style. Today, all three Durbar squares are visited by thousands of people daily. Unfortunately the recent earthquake in Nepal destroyed some of the temples, but the squares are still worth visiting.

We look forward to giving you a wonderful day of sightseeing in Kathmandu.

View More
CUSTOMER REVIEWS ABOUT EXCITING NEPAL TREKS AND EXPEDITION
5 - Excellent
Based on 76 reviews
A
5 - Excellent
Review for another Exciting Nepal Treks and Expedition tour
“We did Annapurna Base camp trek with Exciting Nepal Treks. which was a right choice, Price is reliable, fast communication, knowledgeable guide, an excellent arrangement, I have no hesitation to recommend this company.”
C
5 - Excellent
Chelsea's review for another Exciting Nepal Treks and Expedition tour
“This trek was so incredible! Our guide Shiva was very knowledgeable about the mountain and trails. He was so friendly and made our trip very fun and special. He was able to regularly check our oxygen levels and give good suggestions for foods to eat to keep our spirits and bodies working well throughout the trek. Would recommend to anyone looking for the adventure of a lifetime. The views were unbelievable- so bring a camera :)”
A
4 - Very Good
Abdul's review for another Exciting Nepal Treks and Expedition tour
“This simply was the greatest adventure of my life so far and i doubt anything i do will top this. I live at sea level and have never ever been on a real mountain before, though I always wanted to. hiking up along the treks was not very easy for me at first. But i learned the tricks quickly with a very helpful guide Mr. Sudip. He was really helpful and advised me to go as slow as needed and to take breaks every so often. At one time he even carried my backpack when he felt it would be difficult for me to hike with it, but it actually was not that difficult, and he insisted of carrying it. The trek was usually very easy and i believe if an unfit guy who lives at sea level can do it, anyone can really do it. The views everyday was breathtaking to me. But the view from the Gokyo Ri was the most amazing of them all. I could have stayed there for hours starring the turquoise lakes and view of mountain range including mount Everest. All in all, I absolutely loved this great adventure.
However, there are few things i would have like to be different in the trip. It was not easy to maintain a good hygiene as there are no hot showers except for in a very few (i think 2) places we stop for the day during the trek. So, it will be better to have wet wipes with you to get cleaned.”
Read more Exciting Nepal Treks and Expedition reviews
WHAT'S INCLUDED WHAT'S EXCLUDED
Why Book with Bookmundi
What are customers saying about Bookmundi
Excellent
4.71 Average 333 Reviews

NEED HELP OR HAVE A QUESTION ABOUT THIS TOUR?
If you have any question about this tour or need help with planning a trip, please do not hesitate to get in touch with us. We're ready to help.
Get help
hours 01 From US$ 85 See Group Discount
CHECK AVAILABILITY
Response Time: 1 hour Response Rate: 100% MAKE AN ENQUIRY