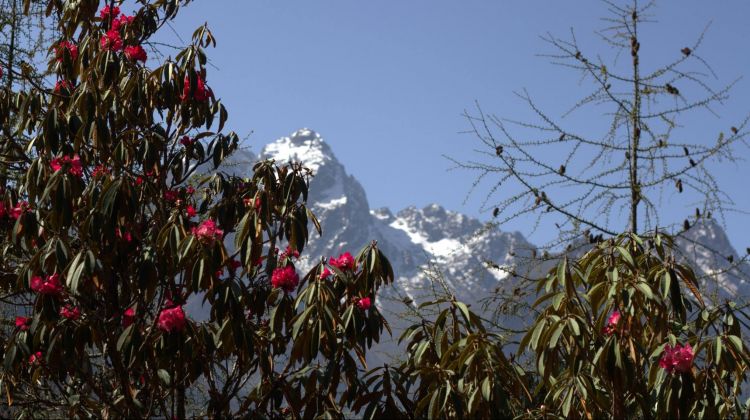 HIGHLIGHTS
Many people have described the Kanchenjunga trek as the finest trekking route in Nepal. It is a long trek going deep into the remote mountain ranges on Nepal’s border with Sikkim and Tibet. The trail explores the areas around Kanchenjunga the second highest mountain in Nepal and the third highest mountain in the world (once thought to be the highest among the world’s giants).

The mountain is part of the Great Himalaya Range. The Kanchenjunga massif is in the form of a gigantic cross, the arms of which extend north, south, east, and west. This recently opened Kanchenjunga region routes offer the chance to discover absolutely unspoiled highlands wilderness. In Tibetan, ‘Kanchenjunga’ means ‘the five treasure houses of snow’, which gives you some idea of what to expect when visiting the area. The Kanchenjunga conservation area (20,35Sq km) extends into protected areas in Sikkim and Tibet, and comprises beautiful and unspoiled wilderness. The area is snow leopard territory, but the reclusive predator shares the unbounded forests with the Himalayan black bear and the Assamese macaque, musk deer and red panda among others. Cascading waterfalls, lush vegetation and thousands of species of plants await the trekker. More than 2,000 different flowering plants have been recorded in the Kanchenjunga area and in the springtime some of the richest rhododendron forests in Nepal can be seen.
View More
CUSTOMER REVIEWS
5 - Excellent
Based on 1 review
A
5 - Excellent
Kanchenjunga Base Camp
“Chhatra I found right through out our communication (both in Australia and in Nepal) to be informative, respectful to my individual requests and very flexible to my changing needs and it appeared to me that Chhatra was available 24/7. What more can you ask for when traveling oversea Nothing that I can think of because Chhatra had already done the thinking for me.Thanks for a fantastically well organised trek Chhatra :)”
ITINERARY
Alt. in: ALTITUDE MAP
Expand All
WHAT'S INCLUDED OPTIONAL ADDONS (Available during check-out) WHAT'S EXCLUDED
Why Book with Bookmundi
What are customers saying about Bookmundi
Excellent
4.71 Average 334 Reviews

QUESTIONS AND ANSWERS Find answers to the most frequently asked questions about this tour.
Read more questions and answers
NEED HELP OR HAVE A QUESTION ABOUT THIS TOUR?
If you have any question about this tour or need help with planning a trip, please do not hesitate to get in touch with us. We're ready to help.
Get help
days 25 From US$ 2,100 See Group Discount
CHECK AVAILABILITY
Response Time: 2 hours Response Rate: 100% MAKE AN ENQUIRY