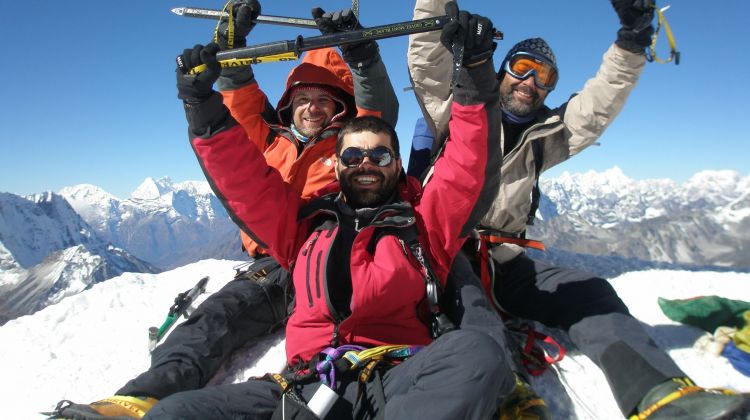 HIGHLIGHTS
Island Peak, known as Imja Tse is a mountain located in the Khumbu region of the Himalayas in Eastern Nepal. The peak was entitled Island Peak in 1951 by Eric Shipton´s party since the peak looks like an Island in a sea of ice when it is seen from Dingboche. The peak was later in 1983 assigned the new name Imja Tse but Island Peak remains the popular choice. Island Peak is one of the most popular trekking peaks in Nepal.

Climbing Island Peak is an incredible experience for adventure trekkers, standing at 6,189 m. From the summit you'll be given spectacular views across the whole Khumbu Region. The summit also lies adjacent to the South Face of Lhotse, one of the world’s largest ice walls, and offers stunning views of beautiful Ama Dablam and Mt. Makalu as well.

The Island Peak climbing journey starts after a 1 hour flight from Kathmandu to the gateway of the Everest region, Lukla. We'll start with trekking to Namche Bazar and from there head towards Gokyo Valley where we'll be trekking up to Gokyo Ri, one of the best trekking view points in the Himalayas. From Gokyo we will also be crossing the Cho La Pass and head over towards Everest Base Camp, where we'll also be ascending up to the +5600 m viewpoint of Kala Patthar.

The fact that we are hiking up to Gokyo Ri, crossing Cho La Pass and also reaching up to Kala Patthar prior starting our climbing expedition from Chukung helps the acclimatisation tremendously. Climbing Island Peak will take 1 full day, including spending 1 night at Island Peak Base Camp at 5070 m.

We look forward to taking you on an adventure of a lifetime. Please see the day-by-day itinerary for further details.
View More
CUSTOMER REVIEWS
4.5 - Very Good
Based on 5 reviews
A
4 - Very Good
Great trip although some days seemed to be very short.
“Great trip unforgettable Deighton, good food and a very nice guide. I'm a quick walker so some days seemed very short with a lot of spare time but overall a wonderful experience.”
A
3 - Average
Island Peak with Buddha Trekking and The expedition
“I was satisfied with Buddha Trekking and Expedition prompt email correspondence, meet / greet at airport, transfers to and from hotel and the trekking guide. I was very disappointed with the chosen climbing guide that took over at Island Peak Base camp. He was arrogant and dismissive when I needed to take a break to drink some; while crossing the glacier and being short ropped together he tugged on the rope as to say that I was walking too slow which caused me to stumble and fall several times which is particularly dangerous when walking on glaciers riddled with crevasses. I would rate this high if better care was taken in which mountain guides are used.”
Buddha Treks and Expedition responded to this review on 30 May 2017: “Dear Tyrone,
Greeting from Buddha Treks!

Thanks you very much for contacting us to organize your holidays in Nepal. We highly appreciate an opportunity and your trust on us.

We apologize to know that you did not have good experience with climbing guide, we have provided. Normally, he used to work sincerely and honest on his duty. Therefore, we have used him. We appreciate your review about him. It is nice to know so we will have an opportunity to correct errors in the future. We defiantly correct it.

Other Practical InformationEvery effort will be made to keep to the above itinerary, but as this is Adventure Travel in a remote mountain region, we cannot guarantee it. Weather conditions, road conditions, vehicle breakdowns and the health of climbers can all contribute to changes. The Expedition Leader or our guide will try to ensure that the trip runs according to plan, but an easy going nature will be an asset! RECOMMENDED EQUIPMENT FOR CLIMBING AND TREKKING: Climbing Equipment: Ice Axe, crampons, harness, carabiner (with lock and normal), eight fingers, Jumar, plastic boots, etc. These can all be rented in Kathmandu at reasonable prices. Footwear: Trekking Boots, thick socks, light socks, camp shoes. Clothing: Down or fibre Jacket, filled waterproof jacket and trousers, sweater or fleece jacket, warm cotton trousers, shirts and T-shirts, shorts, long underwear, wool hat, sun hat, gloves, bathing suit, track suit. Other equipment: Sleeping bag (4 seasons), down jacket, daypack, water bottle, sun cream, sunglasses, flashlight with spare bulbs and batteries, lip salve, gaiters. Optional: Insect repellent, toilet articles, note book & pen, toilet roll, laundry soap, pocket knife, towel, sewing kit, plasters, binoculars, camera, film, cards and personal medical kit.
QUESTIONS AND ANSWERS Find answers to the most frequently asked questions about this tour.
Ask a question
NEED HELP OR HAVE A QUESTION ABOUT THIS TOUR?
If you have any question about this tour or need help with planning a trip, please do not hesitate to get in touch with us. We're ready to help.
Get help
days 23 From US$ 2,195
CHECK AVAILABILITY
Response Time: 3 hours Response Rate: 100% MAKE AN ENQUIRY

Tour is operated by : Buddha Treks and Expedition
69 Reviews
Currently 02:05 in Kathmandu MAKE AN ENQUIRY Response Time: 3 hours Response Rate: 100%
YOU MAY ALSO LIKE 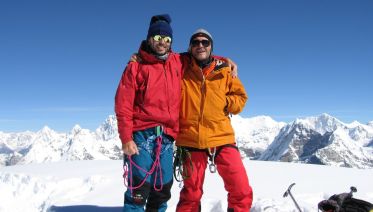 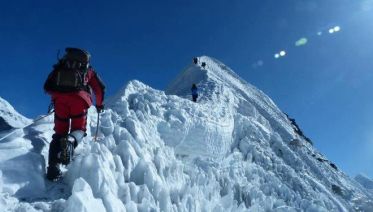 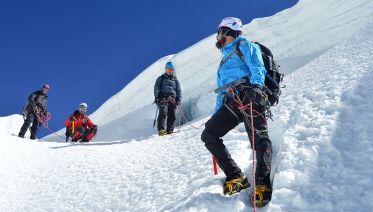 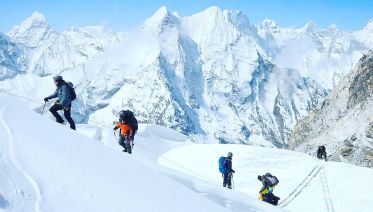 of 13 reviews
days19 From US$ 2,090
Other recommended tours
Related Nepal tours and trips
Nepal tour packages departing in
Welcome back!