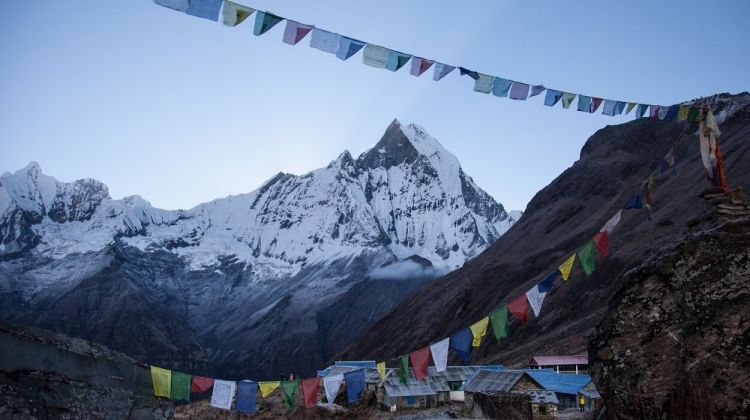 HIGHLIGHTS
Take the road less travelled during this eight-day trip and experience the beauty of areas not far from the Kathmandu Valley. Join us on this guided trek to Helambu, just 80 km away from the valley. Enjoy great views of the Langtang Range and learn more about the Hyolmo people.

The trek starts from Sundarijal, located on the eastern side of the Kathmandu Valley, and continues via Shivapuri National Park, Chisopani, Kutumsang, Thadepati and Sermathang before coming to an end in Melamchi Pul Bazaar in the Helambu region.

This is a relatively low-altitude trek along a less busy route through temperate forests, green valleys, lush fields and Tamang and Sherpa villages. You will see Langtang, Manaslu, Ganesh Himal, Rolwaling and Gauri Shankar mountains along the route.
View More
CUSTOMER REVIEWS ABOUT ICICLES ADVENTURE TREKS AND TOURS PVT LTD
5 - Excellent
Based on 69 reviews
T
5 - Excellent
Tommy's review for another Icicles Adventure Treks and Tours Pvt Ltd tour
“The Annapurna Circuit trek is a very well known and popular hike in the Annapurna region of Nepal. The start of the start of the trek at low altitude will take you through lush, tropical forests with spectacular waterfalls and colourful local plant life. As you progress higher, the scenery will change and you will hike through pine forests similar to those you will find in Northern Europe. As you climb higher still, the landscape will become more barren and dramatic all the way up to the thorog la pass 5416m. At each stage you of course get incredible views of several amazing mountains on the route including Annapurna I, II, III and VI, Gangapurna, Tilichio and several others.
The terrain is generally rocky (I went in the dry season so cant say how it is other times of year) and of course as you would expect it is fairly hilly! There are several large climbs and descents, which get harder as you gain altitude. Most people bring walking sticks which help the knees.
A road has now been constructed along a large section of the route which of course does ruin a bit of the peace and quiet, however there are not a huge amount of vehicle using it at present. Each time a vehicle passes it does kick up a lot of dust but it wasnt a big problem for me. You will also be sharing the walk with donkeys, yaks goats and ponies.
The accommodation is local guest lodges, called Tea Houses most are basic but perfectly comfortable and clean, and each place we stayed in was run by a friendly nepali, (usually family run) You can usually get a hot shower although not always available.
You will pass through many towns ranging from very small to quite large. Each is charming and you will have lots of fun exploring them. There are plenty of temples, prayer wheels etc to check out.
The food is very tasty and plentiful - Each Tea house will cook you a decent hot meal with traditional Nepalise dishes such as Dhal Bhat and mo-mo on the menu.
Please take note that you do need to be in good physical condition to complete this hike. It is not a gentle stroll in the park and some parts do get steep. Having said that as long as you are in good health you should not be put off by this route.
I am sure I will never forget this trip, it was a really fantastic way to spend 2 weeks and I look forward to returning to Nepal!”
C
5 - Excellent
Cristiano's review for another Icicles Adventure Treks and Tours Pvt Ltd tour
“Everest base camp trek was special trip for me, a birthday gift from mother. This 12-day experience remains to be one of my life's proudest moments, because not everyone can say they've been there and done it. It is naturally not the same as the sweet victory of summiting Everest, but hey, Everest Base Camp is still not an easy trek and it never will be.”
N
5 - Excellent
Nicholas' review for another Icicles Adventure Treks and Tours Pvt Ltd tour
“Essentially I did two treks: the well-known trip to Ghorepani and Poon Hill, and then on to the two base camps. I am 37 and in average physical condition and I found the going tough but not overwhelmingly so. The main challenge is climbing endless steps, both up and down. Hardly any of the trek is actually flat. I didn't have any trouble with my knees and I didn't need the trekking poles I bought in the end but if you don't think you can handle the strain on your knees and thighs etc then you'd probably best look at a trek which is flatter.

The first two days consist of walking up to Ghorepani via a series of tiny hamlets. In the sun it can be very hot, despite it being winter. The pre-dawn hike to Poon Hill was one of the hardest parts of the entire journey, mainly because it is done before breakfast and I felt quite weak and faint. I didn't think I would make it but I did in the end. The views at the top are beautiful. It wasn't freezing cold but gloves and a hat were handy. I borrowed a knock-off down jacket and used it during this climb and on a few other evenings but I could have done without it I think.

After Poon Hill was one of the most beautiful legs of the trek, walking through pine forests along the ridge of the mountains with spectacular views and then later alongside a stream until we reached Tadapani. After this there were a number of days where we didn't really ascend much but of course there were lots of steps up and down while we gradually skirted around the hills until we reached the valley which leads to MBC. Expect to see more hamlets, some villages, lots of cows and mules and goats, some flowers, plenty of trees and of course from time to time, the mountain peaks.

The final two sections from Bamboo to Deurali (3200 metres) and from Deurali to ABC (4100 metres) were very, very tough for me because I began to get out of breath due to the altitude. I was panting like I was running at top speed on the tread mill! My advice is simply to walk very, very slowly when climbing there. Try to take a breath for every step you take. (I was carrying 12kg on my back and it would definitely have been easier with a porter).

On the way down it was much quicker. It took me 2.5 hours to get from MBC to ABC, but on the way down, walking at brisk pace, I did the same distance in just 40 minutes. So my walking speed going up was 3 or 4 times slower than coming down.

I only stayed at ABC for an hour. The views are wonderful because you are surrounded by mountains and you can see (and hear) the glaciers. There are semi-frozen streams and huge boulders everywhere. I reached ABC on December 12th and it wasn't too cold but apparently I was lucky with the weather and in previous years it has been snowing at that time. That would have made things a lot more difficult.

One of the problems I had was washing clothes and drying them because there was so little sunshine, especially as we got higher. In the morning shade persisted until well after 10am and then the sun would go behind the peaks by around 3 or 4pm. At ABC the sun disappeared at 1.52pm!

A few items I brought with me which were very useful included a mini water filter (it paid for itself by the end), zip lock bags (to go to the toilet at night instead of walking outside in the freezing cold!), a portable clothes line (I dried my clothes in my room at night), oat bars (for a welcome snack and energy boost - these things aren't available in the trek), a high capacity power bank and a solar charger (you have to pay for electricity after Ghorepani), a microfibre towel (a normal towel would never dry!) and finally sunscreen spray (it gets very hot in the day).

I wish I had brought more liner socks (I had only two pairs, four would be better). Four hiking socks were enough. I also brought far too many chargers for my cameras and batteries and those weighed me down a bit. I also forgot to buy a sunhat which would have been useful. I had my own sleeping bag and a thermal liner and I was never cold at night. During the day I relied on trekking pants and a long-sleeved lightweight base layer. If the sun disappeared I either added a wool-based layer or my fleece. I had a thin rain jacket as well and that was very handy for keeping the wind off, though it wasn't very windy really and it never rained.

You can see the photos of my trek here: http://tinyurl.com/jlhyprp

QUESTIONS AND ANSWERS Find answers to the most frequently asked questions about this tour.
Read more questions and answers
NEED HELP OR HAVE A QUESTION ABOUT THIS TOUR?
If you have any question about this tour or need help with planning a trip, please do not hesitate to get in touch with us. We're ready to help.
Get help
days 08 From US$ 450
CHECK AVAILABILITY
Response Time: 2 hours Response Rate: 100% MAKE AN ENQUIRY