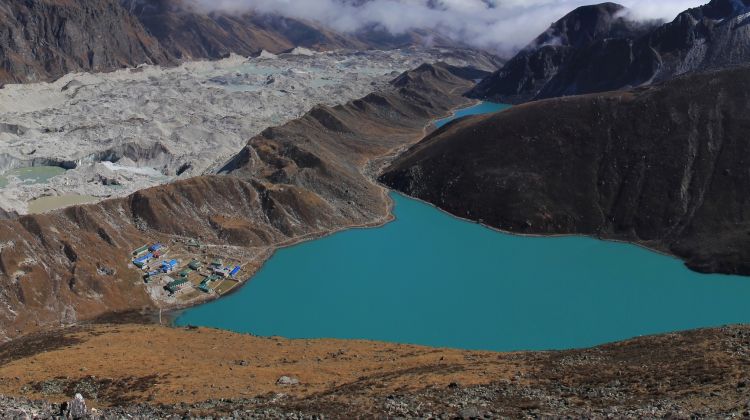 HIGHLIGHTS
Everest Gokyo Trek gives you an unrivaled view of Mount Everest from Gokyo Ri. On this guided trek, you'll not only walk alongside the Himalayas and the Dudh Koshi river, you'll also reach the turquoise glacial lakes of Gokyo and Ngozumpa Glacier, the largest in Nepal's Himalayas.

You're trek starts after a short flight to Lukla, from where you'll make your way through Shrepa villages, Buddhist monasteries and rhododendron forests to the settlement of Gokyo. The hamlet is alongside the tranquil Gokyo Cho, or Dudh Pokhari, and on the base of Gokyo Ri (5,357 m).

Trek to the top of Gokyo Ri for an expansive view of Cho Oyu, Mount Everest, Lhotse and Makalu, among others. You'll also see five glacial lakes of the region: Longpongo, Taboche Tsho, Gokyo Cho, Thonak Tsho and Ngozuma Tsho.

One of the highlights of the trek is also the spectacular view from ice point between Cho Oyu and Gyachung.

QUESTIONS AND ANSWERS Find answers to the most frequently asked questions about this tour.
Read more questions and answers
NEED HELP OR HAVE A QUESTION ABOUT THIS TOUR?
If you have any question about this tour or need help with planning a trip, please do not hesitate to get in touch with us. We're ready to help.
Get help
days 11 SavingUS$ 72
You have unlocked exclusive savings:
5% OFF TODAY From US$ 1,445 US$ 1,373 See Group Discount
CHECK AVAILABILITY
Response Time: 1 hour Response Rate: 100% MAKE AN ENQUIRY