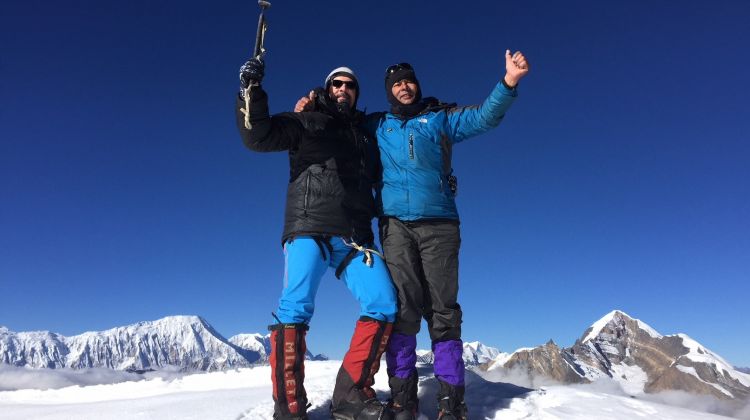 HIGHLIGHTS
Chulu West peak is situated in a small valley and lay north of Manang, away from the key track to the Thorung La. In fact, there are two Chulu Peaks- East and West. Among them, Chulu West (6419m.) is more elevated one. The Chulu West Peak bestows an exciting peak mountaineering option for those trekkers who would love to go to experience adventure in the Annapurna Region. While mountaineering the peak, we will be rewarded by splendid views of peaks like Dhaulagiri, Annapurna, Nilgiri and other massive peaks. Also, climbing the Chulu West Peak requires a good physical condition and a high level of energy. Chulu West peak is one of the parts of the Manang Himal, which is quite specifically included in the bigger Damodar Himal. In the north-to-south way we can observe the pouring of rivers- Nar Khola , Hunlung Khola and Phu Khola. To the south the track is bordered by the Marsyangdi Khola and the Mesokanta La.

Chulu west peak tour begins from Beshi Sahar after driving for 5-6 hours from Kathmandu and from Beshi Sahar the way goes up slowly to Manang valley, one of the highest valleys in the world located at an elevation of 5000m. And, from Manang valley the path moves north to the Chulu West Base camp. The major highlights of the trek are passing through the Marsyangdi valley which will mesmerize you with the views of Manaslu, Gangapurna, Annapurna II, III, IV and Tilicho peak; exploring Gyaru and Pisang village and visiting Muktinath temple. Go for climbing the Chulu West Peak (6419m.) taking support from Unique Adventure and make the daydream of peak climbing experience at the regions of Annapurna come true. Spring and autumn are perfect seasons to go for climbing Chulu West Peak.
View More
CUSTOMER REVIEWS
4.5 - Very Good
Based on 4 reviews
A
3 - Average
This is Chulu East Peak Climb, not West.
“Great peak to climb. However, the itinerary is not efficient. I had to pay for 23 days trip (come back the same way) but it can be done for 16 days (i was back home 6 days earlier) by using bus and jeep instead of walking on the jeep road for 4 days. With 23 days we totally can come back different way (thru Thorong la Pass)”
P
4 - Very Good
Very Good
“Very Good”
A
5 - Excellent
Best Agency in Nepal
“Khum and his team are BY FAR the best in Nepal ! Decades of Experience ! TOP !!!”
I
5 - Excellent
Great Chulu West SOLO Expedition !
“I used Unique Adventure for a solo climb expedition of Chulu West in the Annapurna Region (6419m Peak)

Khum and Krishna at the office did a great job in setting everything up and communication during the expedition was easy, fast and efficient.

The logistics were taken care of without any major hiccups.

This expedition is quite an undertaking with setting up both a base camp on around 5000m and a High Camp around 5600m, but everything went smoothly.

The absolut highlight were the guides:

I cant praise the guides enough and would urge you to request them specifically for any high altitude climbs !

We had a great successful summit day with amazing weather and reached the summit in record time just for sunrise !

I give Unique Adventure and Bishnu and LakCha my highest recommendation !”
ITINERARY
Alt. in: ALTITUDE MAP
Expand All
WHAT'S INCLUDED OPTIONAL ADDONS (Available during check-out) WHAT'S EXCLUDED
Why Book with Bookmundi
What are customers saying about Bookmundi
Excellent
4.68 Average 348 Reviews

QUESTIONS AND ANSWERS Find answers to the most frequently asked questions about this tour.
Ask a question
NEED HELP OR HAVE A QUESTION ABOUT THIS TOUR?
If you have any question about this tour or need help with planning a trip, please do not hesitate to get in touch with us. We're ready to help.
Get help
days 17 From US$ 2,090 See Group Discount
CHECK AVAILABILITY
Response Time: 3 hours Response Rate: 100% MAKE AN ENQUIRY