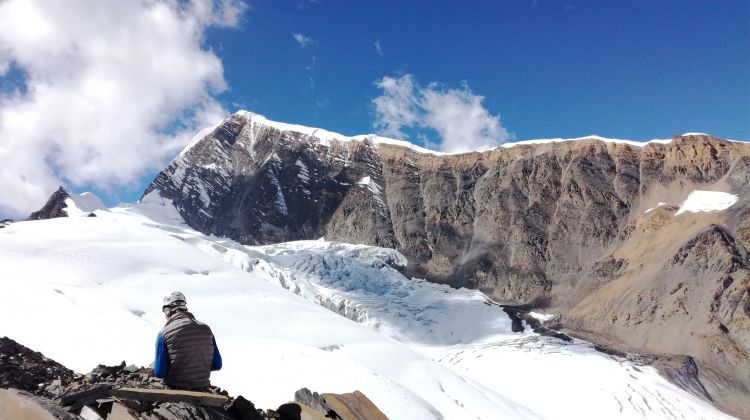 Among the three Chulus, Chulu Far East Peak is considered the easiest. The peak was first ascended by a German Expedition team in 1955. Climbing the Chulu Far East Peak is a perfect opportunity for climbers seeking to achieve a relatively moderate peak climbing adventure, but who also wishes to explore the Annapurna region and Tilicho Lake – one of the highest lakes in the world, situated at an altitude of 4,920 meters. Another highlight of this tour is the day of crossing the challenging Mesokanta La Pass at 5,120 meters from where we will have amazing views of Mustang and the Tibetan Plateau.

After spending a couple of days in Kathmandu, we will head to Chame, the starting point of the trek. From Chame we start our trek through narrow ascending trails surrounded by dense forests until arriving at Pisang. We continue our trek to Humde Village where we will see large prayer wheels, until finally reaching Junu Khola. After acclimatizing a day at Junu Khola, we continue our trek on a steep climbing trail to Chulu Far East Base Camp, where we are rewarded with some splendid views of the Annapurna mountain range. We will spend an additional day acclimatizing at Chulu Far East Base Camp with climbing training, preparation and a short hike up to some of the surrounding glaciers. After staying in Base Camp for 2 nights we will make our way to through snow slopes to High Camp at 5500m, where we will stay for one night. The rest of the day will be spent on preparing for the following day's summit attempt.

Fully equipped and properly acclimatized we start early and head towards Chulu Far East peak summit. Following the guidance of our experienced climbing experts, we cross through gradual but steep snow ridges and rocky parts, before finally heading towards the summit of Chulu Far East Peak. Once at the top we are rewarded with magnificent views of Annapurna I, II, III, IV, Dhaulagiri, Gangapurna, Manaslu, Pisang Peak, Chulu West and several snowcapped peaks bordering Tibet.

We will be spending only a short but high quality time at the summit, after which we will make our way back down to Base Camp. Our journey then takes us towards Tilicho Lake – a crystal clear glacier lake. From there, we trek towards the crossing of the challenging Mesokanta La Pass at 5120m and continue a rather easy downhill trekking passing through Yak Kharka, Muktinath and finally arriving at Jomsom.

Our memorable and adventurous Chulu Far East Peak Climbing adventure ends with a scenic flight from Jomsom to Pokhara and then a drive from there back to Kathmandu. If you wish to spend a few days in Pokhara before going back to Kathmandu, that's also possible. We will still cover the transport back to Kathmandu from Pokhara.

Please see the detailed itinerary for a full overview of this amazing climbing adventure.
View More
CUSTOMER REVIEWS
4.5 - Excellent
Based on 3 reviews
N
4 - Very Good
Incredible Journey of Chulu Far East Peak
“We had amazing 20 days trip with Nepal Guide. In this trip, we were going to climb Chulu Far East Peak with our guide Sonam Sherpa. Sonam Sherpa was always smiling and helps us during trekking and climbing.
Our trip starts from Kathmandu to Chame. We trek around daily 5 hours to reach the base camp of chulu far east. During base camp, we cross several technical sections of chulu with help of our guide. Next day, We climb the Chulu far east peak that was awesome views of Annapurna region mountains. We descend back to base camp and trek to Tilicho Lake and crossing the Mesokanta La Pass 5,120 meters, that was quite difficult to cross but views were great from that point of Mustang. Overall Our trip is quite good and high level of adventure. NepalGuide provided service is good and arranging is also good.”
I
5 - Excellent
Dare to Climb Chulu Far East
“I heard about Nepal many times in Switzerland and also known as "Asia's Switzerland". So, I want to travel Nepal for peak climbing Purpose.Prakash (Managing Director) was extremely helpful and prompt to all my email queries when we organised this trip.
Nepal guide Treks successfully arranged for me only for Chulu Far East 6059m in October 2017. I already climb Dufourspitze which is the highest mountain in Switzerland.So, I had experience in peak climbing. In October, we trekked to pisang and towards the Chulu Far East Peak. We successfully climb Chulu far east Peak with the help of Our Guide Ang Dendi Sherpa and porters. View from Chulu, that image was beyond your imagination. When we back from Chulu, we can see world's highest altitude lake "Tilicho lake" that was an awesome experience I ever had. We celebrate party in Pokhara to successful climb Chulu Far East Peak.”
H
5 - Excellent
Successful summit of Chulu Far East Climbing 2017
“2017 went awesome for me. i did this trip with company named Nepal Guide Treks and Expedition and i made it to the summit of chulu. it was such an amazing moment for me to make it to the summit, proud moment for me.
The guide Dendi sherpa helped a lot during the whole climbing.
He is everest summitter climbing hero i feel fortunate enough to join him for this trip.
I Strongly recommend Nepal Guide Treks and Expedition for awesome Peak Climbing Experience. These guys are great at Peak Climbing and have good success rates.”
ITINERARY
Alt. in: ALTITUDE MAP
Expand All
WHAT'S INCLUDED WHAT'S EXCLUDED
Why Book with Bookmundi
What are customers saying about Bookmundi
Excellent
4.69 Average 340 Reviews

Other Practical InformationMeals: Our each and every trekking and peak climbing package trips are inclusive of all meals (Breakfast, Lunch and Dinner) including the package trip of this Chulu Far East Peak Climbing during the entire trekking and climbing period, apart from the BB plan stay in Kathmandu. We will have Dinner and Breakfast in the same tea house/Camp where we spent overnight and Lunch will be en-route of trekking towards next destination since we have to leave our accommodation after breakfast to continue the trek. You can enjoy the taste of varieties of cuisines; Nepali food, Tibetan, Continental, Indian, Italian etc by choosing in the menu. During the camping period while we are in Chulu Far East Peak Base Camp & High Camp, our kitchen team will prepare hygienic foods to serve you. There might not be several choices of foods during the camp as in the tea houses and restaurants; you have to understand that our crew have to carry all camping gears and kitchen equipments from available places but we are sure we will provide as much services and facilities as we can do to make your adventure holiday awesome. Physical Conditions and Experience Required: Every Peak Climbing is a technical adventure activity in Nepal which requires previous trekking experience and technical skills about peak climbing gears to have successful summit. The trip is very suitable for adventure motivated Climbers who have ability to walk in snows ridges and adventurous trails. The peak is also suitable for beginner level climbers. After the devastating earthquake in Nepal, there are few crevasses added in Chulu Far East Peak which has increased the difficulty level of climbing directly. We suggest every adventure seekers who are planning to come Nepal for trekking adventure to do daily around an hour physical workout (jugging, hiking, cycling, gym, etc) prior to a couple of weeks. Best Season for Chulu Far East Peak Climbing: Peak Climbing in Nepalese mountain is seasonal. Basically, 3 months in autumn – September, October & November and 3 months in spring – March, April & May are the perfect time for this Chulu Far East Peak Climbing. During the time, weather would be clear, sunny and warm in Himalayas thus we can have great views of surrounding mountains. Nevertheless, some adventure-seeking clients who do not like crowded environment also can choose December, January, and February months for this trip. Monsoon season three months (June, July, and August) will be ruined by rains. Equipments Required For Climbing: We require several equipments to have every peak climbing experience in Nepal. Here we have classified the list or equipment, some you need to bring yourself and some we provide. You can also buy and rent your personal equipment in Kathmandu. Footwear: Trekking Boots, thick socks, light socks, camp shoes. Climbing Equipment: Ice Axe, crampons, harness, carabiner (with lock and normal), eight fingers, Jumar, plastic boots, etc. These can all be rented in Kathmandu at reasonable prices. Clothing: Down or fibre Jacket, filled waterproof jacket and trousers, sweater or fleece jacket, warm cotton trousers, shirts and T-shirts, shorts, long underwear, wool hat, sun hat, gloves, bathing suit, track suit. Other equipment: Sleeping bag (4 seasons), down jacket, daypack, water bottle, sun cream, sunglasses, flashlight with spare bulbs and batteries, lip salve, gaiters. Additional: Insect repellent, toilet articles, note book & pen, toilet roll, laundry soap, pocket knife, towel, sewing kit, plasters, binoculars, camera, film, cards and personal medical kit.
QUESTIONS AND ANSWERS Find answers to the most frequently asked questions about this tour.
Ask a question
NEED HELP OR HAVE A QUESTION ABOUT THIS TOUR?
If you have any question about this tour or need help with planning a trip, please do not hesitate to get in touch with us. We're ready to help.
Get help
days 20 SavingUS$ 206
You have unlocked exclusive savings:
10% OFF TODAY From US$ 2,055 US$ 1,849
CHECK AVAILABILITY
Response Time: 2 hours Response Rate: 100% MAKE AN ENQUIRY